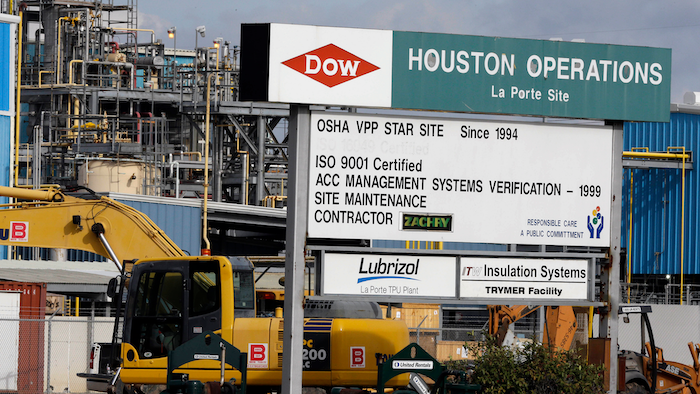 This Dec. 10, 2015, file photo, shows a Dow Chemical plant in La Porte, Texas. A final federal report has found that a series of failures, including flawed equipment and inadequate safeguards, helped cause a 2014 poisonous gas leak that killed four workers at the Houston-area chemical plant. The U.S. Chemical Safety Board said Tuesday, June 25, 2019, various safety management system deficiencies contributed to the severity of the incident.
AP Photo/Pat Sullivan, File

HOUSTON (AP) — A series of failures, including flawed equipment and inadequate safeguards, helped cause a 2014 poisonous gas leak that killed four workers at a Houston-area chemical plant, according to a federal agency's final report on the deadly accident.

Four employees at the now-closed DuPont chemical plant in LaPorte, Texas, died in the release of methyl mercaptan — a chemical used in the manufacture of insecticide and fungicide.

The chemical began leaking from a valve around 4 a.m. on Nov. 15, 2014, in a unit at the plant in La Porte, about 20 miles (32.19 kilometers) east of Houston. Killed in the accident were Crystle Wise, Wade Baker and brothers Robert and Gilbert Tisnado. A fifth worker was injured.

"Our investigation revealed a long chain of failures which resulted in this fatal event, including deferring much needed process improvements; improvements that could have prevented the toxic release," said Kristen Kulinowski, the safety board's interim executive authority.

In a statement, Corteva, a spinoff of DuPont's agriculture division, said while it disagrees with some of the safety board's findings, it values the agency's perspective and will carefully consider the recommendations.

"Our deepest sympathies remain with the families and friends of our four colleagues who lost their lives on November 15, 2014. We are committed to maintaining a safe working environment at our facilities and will work to continuously improve our safety systems," Corteva said.

In its final report, comprised of recommendations that are not mandatory, the safety board said the chemical leak resulted from a long "chain of implementation failures," including the flawed design of piping at the plant and ineffective building ventilation that had been identified five years before the leak but was never fixed.

"The building where the workers died was not equipped with an adequate toxic gas detection system to alert personnel to the presence of dangerous chemicals," according to the report.

The safety board said that once the chemical leak began, "an ineffective emergency response program at La Porte contributed to the extent and duration of the chemical release, placed other workers in harm's way, and did not effectively evaluate whether the chemical release posed a safety threat to the public."

In 2016, DuPont permanently shut down the plant, a move the company characterized as a business decision. But the safety board said the deadly leak offers important lessons for the chemical industry.

The agency said in its report that chemical plants need "a robust emergency response program to mitigate emergencies and to protect the health of workers, emergency responders, and the public."

It also said a company must have a process safety management system that identifies, prevents or mitigates safety issues at a facility, and workers must be able to report injuries or incidents without fear of discrimination or retaliation or other consequence.

In 2018, DuPont agreed to pay $3.1 million to settle a complaint by the Department of Justice and the Environmental Protection Agency that cited 22 violations of the Clean Air Act's Risk Management Program at the La Porte plant.

Lawsuits filed by the families of Wise and the Tisnado brothers following the deadly accident have since been settled.