New Jersey is ordering five companies to spend what could be hundreds of millions of dollars to clean up contamination from the substances. 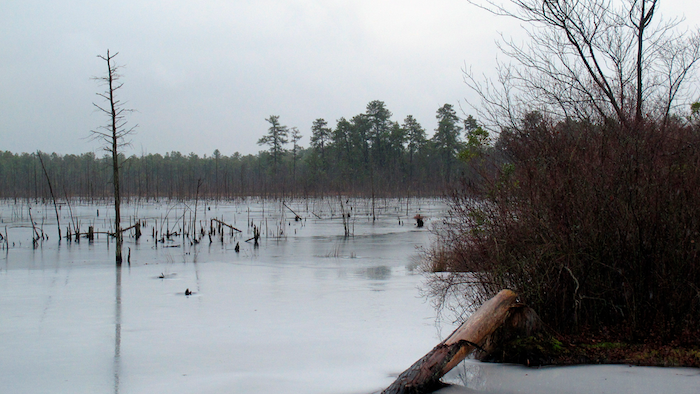 This Jan. 6, 2014, photo shows a section of the Pinelands region in Lakehurst N.J.
AP Photo/Wayne Parry

New Jersey is ordering five companies that manufacture chemicals used to stain-proof clothing and produce non-stick cookware to spend what could be hundreds of millions of dollars to clean up contamination from the substances.

The state Department of Environmental Protection Mo ordered the manufacturers Monday to provide a detailed account of their use and discharge of so-called PFAS substances over the years.

The firms — Solvay, DuPont, Dow DuPont, Chemours and 3M — also must pay to clean up any contamination they caused. If they refuse or drag their feet, they could be charged three times the amount of money the state spends to deal with the problem.

The substances are sometimes called "forever chemicals" because they do not break down, and tend to accumulate in the air, water, soil and even fish. They can harm fetuses and newborns, and have been associated with kidney and testicular cancer, auto-immune illnesses and decreased response to vaccines, according to the state.

They have been used for more than 60 years and have become staples of modern life for consumers who want to protect their clothing from stains or water, and prevent food from sticking to cookware. They have been used in brands such as Stainmaster, Scotchgard, Teflon, Gore-Tex, and Tyvek, according to the state Department of Environmental Protection.

"In issuing this directive, we are putting these five companies on notice that many years of contaminating New Jersey's precious drinking water and other natural resources will not go unchecked," said Catherine McCabe, New Jersey's environmental protection commissioner. "On behalf of all New Jerseyans, we will hold these companies accountable and insist that they step up to address the problem they have created."

Chemours issued a statement saying it is in regular contact with the state regarding such substances and had already decided to reduce air and water emissions of such substances by at least 99 percent.

Solvay said it has already begun remediation efforts at its West Deptford, New Jersey facility, where such compounds are present.

The other companies did not respond to requests for comment.

The U.S. Environmental Protection Agency announced a plan to address PFAS contamination nationally, but that plan could take years to enact.

"This is critical that DEP is going after these companies to make them clean up their mess they made," said Jeff Tittel, director of the New Jersey Sierra Club. He said the state's limits for these substances in drinking water will be the strongest in the nation.

The department would decide whether any plan proposed by the companies is sufficient, McCabe said.

She recommended consumers avoid products that use these substances but acknowledged it is often hard to know whether they are present in a particular item of clothing or kitchenware.

"It seems like we keep doing this to ourselves: inventing these fabulous new things — remember DDT? — and putting them into commerce without looking enough at the risks," McCabe said.