The board of directors of the Las Vegas Convention and Visitors Authority voted Tuesday to authorize contract negotiations with The Boring Company. 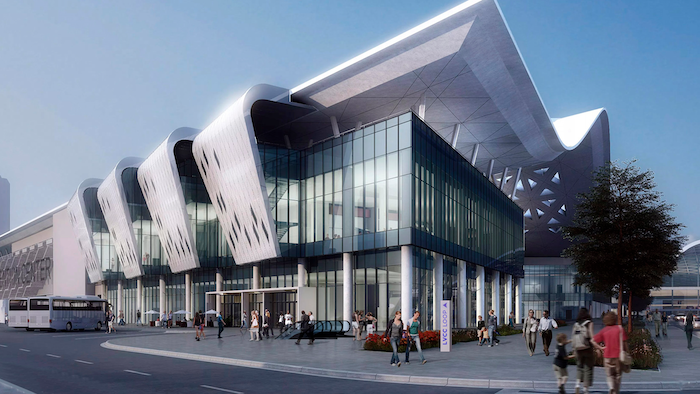 A company backed by tech billionaire Elon Musk moved a step closer Tuesday to building tunnels for an express transit system at a massive Las Vegas convention center despite some local opposition.

The board of directors of the Las Vegas Convention and Visitors Authority voted to authorize contract negotiations with the Musk-backed enterprise The Boring Company.

Authority staff and the company will now develop a detailed design and negotiate the terms of a contract. The project is expected to cost between $35 million and $55 million. The company would pay the cost up front and be reimbursed once the project is completed.

Las Vegas Mayor Carolyn Goodman, a member of the board, voted against the proposal.

She expressed concerns that the company was "exploratory at this time and we are considering handing over the reins of our most important industry." She said she wanted a further briefing on the project.

The authority expects the transit system to have three or four stations, each situated at entrances to the convention center's halls. People would be carried in electric vehicles moving through parallel tunnels, each running in one direction.

The fleet could include Tesla's Model X and Model 3 and a vehicle with capacity for about 16 people — all manufactured by Musk. All the vehicles would be fully autonomous, meaning they won't have backup drivers, and would move at speeds of up to 50 mph (80 kph).

The system of just over a mile (1.6 kilometer) long is expected to debut by January 2021. The convention center hosts over 1 million people a year. Depending on the size of the stations, 4,400 to 11,000 people could use the system every hour.

Authority president and CEO Steve Hill said the agency expects to return to the board with a full design and proposed contract by June.

Musk's dream of an express tunnel transit system has encountered skeptics and setbacks in other cities. The Boring Company canceled plans in November for a test tunnel in the Los Angeles area after a neighborhood group filed a lawsuit.

Its project to move people from downtown Chicago to O'Hare International Airport appears to be in jeopardy after the city's mayoral candidates expressed opposition.

The company in December unveiled a test tunnel built under a Los Angeles suburb, allowing reporters and guests to take rides.

Hill told the board other transportation plans that the authority received as part of a request for proposals are unaffordable and "somewhat unsightly." A board member expressed skepticism over the low cost estimate, saying boring tunnels elsewhere can cost $750 million per mile.

"The cheapest bid isn't always the best because you get what you paid for," said councilwoman Michele Fiore, who sought to postpone the vote.

The Boring Company president Steve Davis last week told The Associated Press the company has been able to reduce costs by eliminating a traditional step in the tunneling process. The company converts the dirt that would normally be taken to landfills into bricks.

"If you can take that dirt, and convert it to bricks and give them away, which is pretty much what we do right now, you just reduced the cost of tunneling by 15 to 20 percent," he said. "If you can sell them for even 12 or 13 cents apiece, which is less than what a brick would cost at Home Depot, you can pretty much take the cost of tunnel almost down to zero. You can really make it unbelievably inexpensive."