Engineers said an innovative finishing technique could slash cleaning costs and, one day, enable appliances that clean themselves. 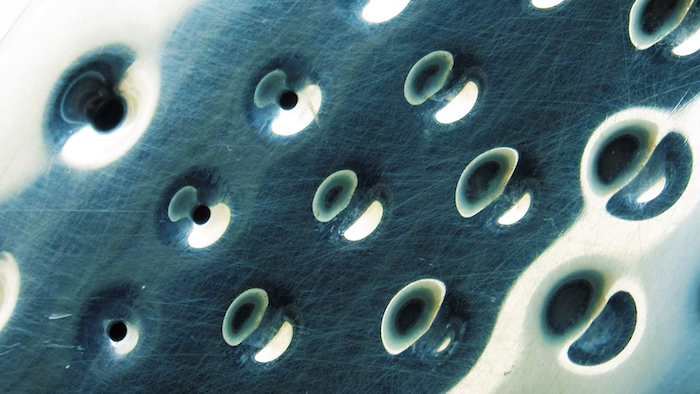 A European research consortium says a new cutting technique resulted in a metal that effectively cleans itself.

Although some plastic components with similar properties were previously developed, researchers said the breakthrough was a first for a metal. They suggested the method could lead to significantly lower costs in food production facilities, or, eventually, to the development of self-cleaning toilets, dishwashers or other household fixtures.

The TresClean Project, led by the University of Parma and featuring researchers from Italy, France, Germany, Spain and the U.K., said the method stemmed from observations of roughened surfaces in nature, such as those on the Lotus leaf.

Engineers used advanced laser cutters, known as photonics devices, to create microscopic spikes and ridges on sheet metal. The tiny pockets of air created by that texture reduced contact between the surface and external liquids.

The project’s use of high-performance scanning heads and a novel beam delivery method also allowed metal to be finished much more quickly than previous laser-etching systems — 500 square centimeters could be texturized in less than half an hour.

The result is a fluid-repellent metal with antibacterial properties that could be produced at scale.

“Bacteria do not get a chance to stick because the contact with the metal surface and the liquid is reduced by over 80 percent,” Parma engineer and project coordinator Luca Romoli said in a statement. “We are looking at an antibacterial metal.”

Romoli noted the product could significantly reduce the amount of time needed for cleaning in food processing plants, such as the systems utilized to make dairy products. The metal surface would not only make food production quicker, he said, but also safer and more profitable.

The technology could one day expand to any segment that needs to prevent bacteria from spreading — everything from advanced medical devices to saucepans.