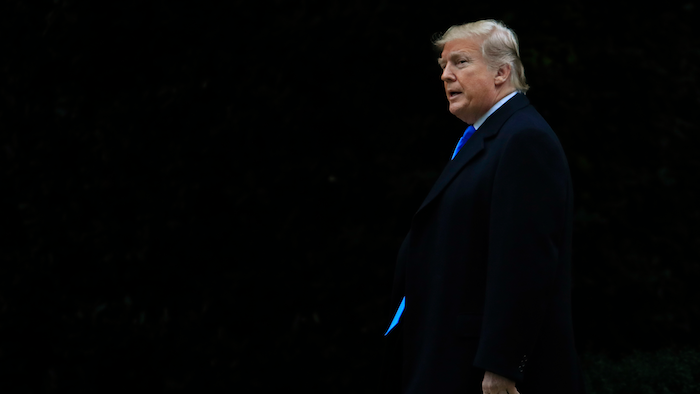 In this Oct. 26, 2018, file photo President Donald Trump walks from the Oval Office as he leaves the White House in Washington to attend a campaign rally in Charlotte, N.C.
AP Photo/Manuel Balce Ceneta, File

Beijing has spent heavily to build up Jinhua and other chip makers as part of efforts to transform China into a global leader in robotics, artificial intelligence and other technology industries.

President Donald Trump has imposed tariffs of up to 25 percent on $250 billion of Chinese goods in an effort to pressure Beijing to roll back those plans.

The company was added to the department's "Entity List," which will require it to obtain an export license for all software, technology and commodities, the Commerce Department said. It said such applications "will be reviewed with a presumption of denial."

That "will limit its ability to threaten the supply chain for essential components in our military systems," Commerce Secretary Wilbur Ross said in the statement.

"We hope the United States will do something that serves the two sides' interest and helps improve mutual trust, instead of the other way around," said a ministry spokesman, Lu Kang.

Calls to Fujian Jinhua's offices rang unanswered Tuesday and there was no immediate response to an inquiry made through their website.

The order marks the second U.S. action this year blocking technology exports to a Chinese buyer.

ZTE Corp., China's second-biggest maker of telecoms equipment, faced possible bankruptcy this year after Washington imposed a seven-year ban on sales of U.S. technology to the company over its exports to Iran and North Korea.

Meanwhile, Jinhua is embroiled in a court battle with U.S. chip maker Micron Technology Inc., which accuses the Chinese company of stealing its technology.

Micron sued Jinhua in December in federal court in California. Jinhua sued the U.S. company the following month in a Chinese court and obtained an order blocking sales of some Micron products.