ShakeAlert will complete its rollout along the West Coast by May. 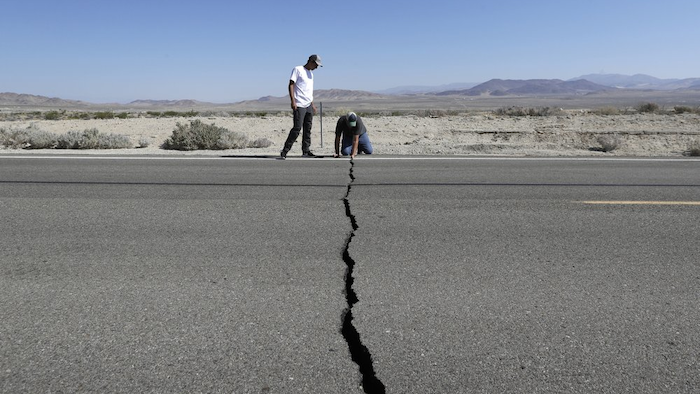 Ron Mikulaco, right, and his nephew, Brad Fernandez, examine a crack caused by an earthquake on Highway 178 outside of Ridgecrest, Calif., July 6, 2019.
AP Photo/Marcio Jose Sanchez

LOS ANGELES (AP) — The earthquake early warning system known as ShakeAlert will be capable of delivering alerts directly to wireless devices in Oregon on March 11 and to Washington state in May, completing the West Coast rollout, the U.S. Geological Survey said Tuesday.

The ShakeAlert system, which warns of significant quakes, has been enabled in California since October 2019.

The system uses a network of sensors that detect the start of an earthquake and calculates magnitude, location and the expected amount of shaking. It sends the information in real time to distributors that send out alerts to cellphones and the internet.

The information moves so quickly that people may have valuable seconds to protect themselves before shaking arrives, trains can be slowed or industrial processes stopped.

The USGS and partners plan a Feb. 18 outreach to Pacific Northwest residents on Reddit and a test message on Feb. 25 to Washington’s King, Pierce and Thurston counties, delivered to wireless devices through the Federal Emergency Management Agency’s Integrated Public Alerting & Warning System.