The law prohibits the use of biometric identifying technology until at least mid-2022. 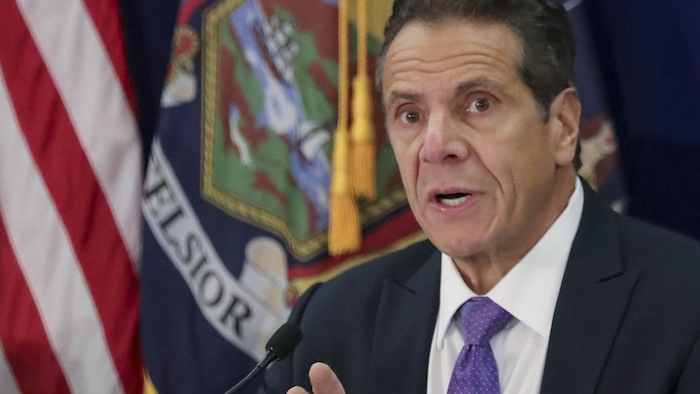 ALBANY, N.Y. (AP) — New York is set to launch automatic voter registration and prohibit the use of facial recognition in schools under bills the governor signed Tuesday.

Lawmakers who have largely met virtually this year passed those bills this summer.

Several bills that lawmakers have passed are still in limbo — including a bill to end driver’s license suspensions for unpaid fines and fees.

Cuomo has 10 days to sign or veto bills — but the clock only starts ticking once the legislation hits his desk. It's unclear what took these bills so long to reach him; but his office and legislative leaders often negotiate on the timing and potential changes to the bills.

New York has different rules for bills that arrive on Cuomo’s desk in the last 10 days of the year: Cuomo gets 30 days to act on such a bill, which dies if he doesn’t take action.

New York will start automatically registering eligible voters who interact with the state Department of Motor Vehicles starting in 2023. The law will apply to public assistance agencies by 2024 and the State University of New York by 2025.

“With this new law on the books, we are taking this work a step further and not only instituting automatic voter registration, but creating a single uniform platform for registering online,” Cuomo said.

But voting right groups are pushing states to automatically register people who interact with those state agencies. New York's law says only eligible voters can register, allows people to opt out of voter registration and directs state agencies to transmit applications to the state Board of Elections.

Supporters said the new system will reduce processing costs and enroll more of state's roughly two million residents who are eligible but not registered.

“This bill will remove one of many barriers in our election system to help New York improve its dismal record of voter turnout,” Assembly Member Latrice Walker said.

New York will prohibit the use of biometric identifying technology in schools until at least July 1, 2022, under the other law signed by Cuomo.

The ban follows an upstate district’s adoption of the technology as part of its security plans and a lawsuit from civil rights advocates challenging that move. The law also directs the state’s education commissioner to issue a report and recommendations about the technology's potential impact on student and staff privacy.

The law effectively pauses the Lockport Central School District's facial recognition system, which was activated in January after meeting conditions set by state education officials. Administrators have said the system can alert staff to guns as well as sex offenders, suspended staff members and other people flagged by law enforcement or prohibited by court order from being in schools.

The New York Civil Liberties Union sued in June to have the system deactivated and hailed the law's passage.

“For children, whose appearances change rapidly as they grow, and for people of color and women more broadly, the accuracy of biometric technologies is highly questionable," said Donna Lieberman, NYCLU executive director.

“Of course facial recognition in schools needs to be studied before any other school district — in New York or anywhere else — does this again,” Jim Shultz, plaintiff and Lockport parent, said in response to the bill's passage.

The district's superintendent didn't immediately respond to request for comment Tuesday. Lockport administrators said in July they were “profoundly disappointed" by the bill's passage.