Huawei Asks US Court to Throw Out Telecom Funds Ban

The lawsuit is the Chinese company's second challenge this year to Trump administration efforts to reduce its already minimal U.S. market presence. 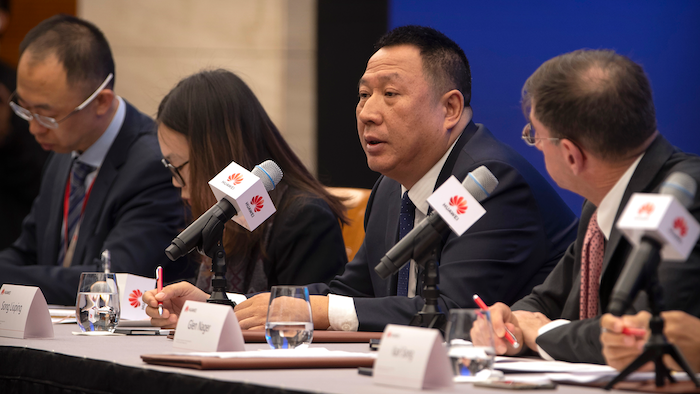 The lawsuit announced Thursday is Huawei Technologies Ltd.’s second legal challenge this year to Trump administration efforts to reduce its already minimal U.S. market presence. The company is scrambling to preserve its global sales of smartphones and network gear following sanctions announced in May that limit access to U.S. components and technology.

Huawei, which says it is employee-owned and has no government ties, denies U.S. accusations it is a security risk and might facilitate Chinese spying.

Huawei is at the center of U.S.-Chinese tension over Beijing's technology ambitions and complaints the communist government steals or pressures foreign companies to hand over know-how.

The decision “is based on politics, not security,” Huawei’s chief legal officer, Song Liuping, told a news conference.

The lawsuit says the FCC exceeded its authority by making national security judgments, designated Huawei a threat without evidence and violated its own procedures by adopting a rule without citing a legal basis.

American courts have traditionally been reluctant to second-guess government judgments about national security.

In a separate lawsuit filed in March, Huawei is asking a federal court in Texas to strike down a ban on the U.S. government using its equipment or dealing with any contractor that does.

Meanwhile, U.S. prosecutors are trying to extradite Huawei's chief financial officer from Canada to face charges she lied to banks about dealings with Iran.

Huawei warned the FCC rule will hurt rural American carriers, which buy the Chinese vendor’s equipment because other major suppliers such as Nokia and Ericsson are more expensive.

Song said that while potential lost sales are minimal, if the rule is allowed to stand, Huawei might suffer “reputational losses” that will “have a further impact on our business.”

Huawei’s U.S. sales plunged after a congressional panel warned in 2012 the company and ZTE were security risks and told carriers to avoid them. However, its sales in Europe and developing markets in Asia and Africa have risen steadily.

The Trump administration imposed curbs in May that threaten to disrupt Huawei’s sales of smartphones and network gear by blocking access to U.S. technology and components including Google's music, maps and other mobile services.

The Trump administration has announced a series of limited reprieves that allow vendors to supply technology needed to support wireless networks in rural areas.

In November, Huawei started selling a folding smartphone, the Mate X, made without U.S.-supplied processor chips or Google apps. The company also has unveiled a smartphone operating system it says can replace Google’s Android if necessary.