Project Debater, a robot that has already debated humans, was pitted against itself for the first time. 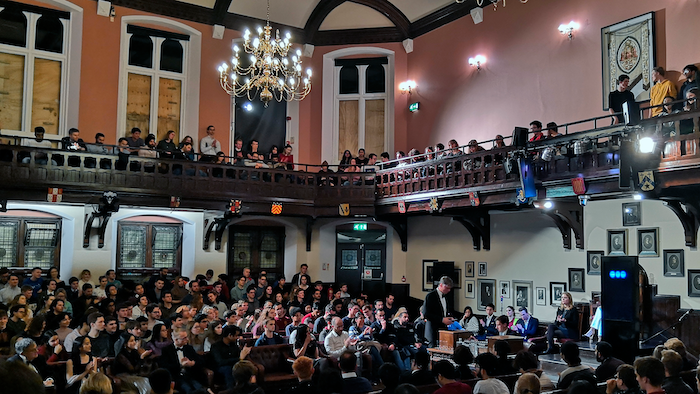 In this Nov. 21, 2019, photo, audience members look on during a debate on the threat of artificial intelligence at the Cambridge Union, the world’s oldest debating society, Cambridge, England.
AP Photo/James Brooks

CAMBRIDGE, England (AP) — The chamber hushed as the debate got underway at the Cambridge Union and the teams launched into their carefully crafted opening statements.

The topic - whether artificial intelligence would do more harm than good - was something each side had a big stake in because both were using the technology to deliver their arguments.

Cambridge University, home to the world’s oldest debating society, was the setting Thursday night for a demonstration of what the future might hold. IBM’s Project Debater, a robot that has already debated humans, was for the first time being pitted against itself, at least in the first round.

Artificial intelligence “will not be able to make a decision that is the morally correct one, because morality is unique to humans,” the computer system said in a synthetic and vaguely feminine voice.

“It cannot make moral decisions easily and can lead to disasters. AI can cause a lot of harm,” it continued. Artificial intelligence can only make decisions it has been programmed for and “it is not possible to program for all scenarios, only humans can."

Then, the machine switched sides, delivering the opposing team’s argument.

Artificial intelligence “will be a great advantage as it will free up more time from having to do mundane and repetitive tasks,” it said, its voice embodied by a blue waveform on a screen set into a two-meter-tall sleek black monolith-like pillar.

Audience members at the society, which has hosted notable figures including British Prime Minister Winston Churchill, the Dalai Lama, and Microsoft founder Bill Gates over its 200-year history, were spellbound by its first non-human guest.

After first pitting the technology against a human last year, IBM challenged it to present opposing arguments, in a display of its latest advances.

Unlike its earlier debate, which relied on analyzing a huge trove of newspaper and magazine articles for its replies, researchers this time crowd-sourced contributions from 1,100 Cambridge students and fed the answers to the computer.

They wanted to find out, “Can you use the technology to generate a compelling narrative that will help the decision maker to take a better decision?" said lead scientist Noam Slonim.

The system had to identify which side the crowd-sourced contribution was on, rank the best arguments, filter out spelling mistakes and bad grammar, then present a persuasive five-minute statement — a process IBM said took about a minute.

Potential applications for the technology include helping a company or government carry out surveys or gather feedback from clients.

Project Debater quipped, "Let's move to an issue close to my artificial heart: technology," drawing laughter from the crowd.

And then human debaters took over in the rebuttal and closing rounds, while also jokingly dubbing the computer "Debbie" and "Cybertronia the All-Knowing.”

At the end of the night, audience members sided with the argument that artificial intelligence does more good than harm.

Its future is assured, at least for now.