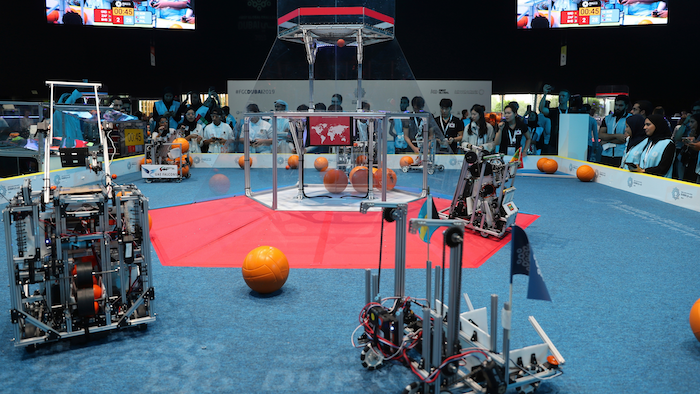 In this Friday, Oct. 25, 2019 photo, a team from Cameroon, on the right, compete with Luxembourg during the First Global Challenge, a robotics and artificial intelligence competition in Dubai, United Arab Emirates. Seeking to bolster its image as a forward-looking metropolis, Dubai hosted the largest-ever international robotics contest this week, challenging young people from 190 countries to find solutions to global ocean pollution.
AP Photo/Kamran Jebreili

Event organizers say their selection of Dubai as host reflects a vote of confidence that this oil-rich Emirati sheikhdom can be a global hub for innovation. They also expressed hope that bringing together tomorrow's scientists and engineers will help develop technologies to solve the world's most pressing issues, particularly those related to the environment.

Dean Kamen, founder of FIRST Global Challenge, said the Middle East represents a part of the world where "the adults have not learned how to play nice with each other" and it was up to young people to fix humanity's self-inflicted wounds.

"We are in an accelerating race toward catastrophe, whether it's global warning, melting of the (polar ice) caps, bird flu, terrorism — you name it, we're worried about it. The solution to most of the world's grand challenges depends on better technologies than we have today," he said.

"This globe of ours is on life support, so the thought is we get every kid in every country to focus on learning how to use technology, but focus on using it as a tool and not a weapon," he explained.

The unofficial "Robotics Olympics" seeks to encourage young people to pursue subjects known as STEM — science, technology, engineering and mathematics. Teams of four to five students, aged 14-18, each received a kit of rods, wheels, wires and other raw materials with which to assemble their roving robots. Their task: Collect orange balls of various sizes from a playing field, which represented human-created pollutants in the ocean. Some devised robots for scooping, while others snatched up and fired the balls through the air into the receptacles.

The teams then formed "alliances," each with up of four nations, to battle their way to the final round. Overall, 1,500 students took part.

A team captained by Belarus, and including Syrian refugees, eventually won the gold medal, edging out a team captained by Israel in a dramatic final match. But organizers stressed a message of unity, not conflict.

"The kids get it. To them this isn't a competition; this is a 'coop-etition.' This is a celebration of technology," said Kamen.

Robotics is a natural fit for Dubai, a city that's already testing driverless cars and taxis. It's become a magnet for international entrepreneurs, with an entire zone called "Internet City" that's packed with high-tech startups. Next October, Dubai will host the Expo 2020, welcoming technological breakthroughs from around the world.

"If we are to become the city of the future, we need to have the right talent from around the world," said Omar Al-Olama, the 29-year-old Emirati Minister of Artificial Intelligence, the world's first such minister. "Artificial intelligence is based on data. Data is what drives all these new technologies. We have the holy grail of data. We have 200 nationalities represented in this country."

FedEx recently announced Dubai would become the first city outside the U.S. to test Roxo, an autonomous delivery device that can travel on sidewalks and even unpaved surfaces.

Roxo made its debut international appearance at this week's robotics contest, drawing the interest of the tech-savvy teens hailing from places as diverse as Afghanistan to Zimbabwe. They mingled in Dubai's Festival City, exchanging experiences and forming friendships while talking shop about their gadgets.

"We didn't do so well in the matches because we had a lot of trouble with the control hub, but it doesn't matter, we had a lot of fun," said Stefan Sijbesma, 17, from the Netherlands. "For me, robotics is really important because it really helped me choose what I want to study and what I want to do with my life."

The three-day tournament had a festival-like atmosphere to it, with announcers and commentators analyzing the action in sports-broadcast style and fans waving flags and banners supporting their teams. The pavilion floor was filled with facts about the millions of tons of pollutants threatening the world's oceans, and featured slogans such as "united by land, connected by oceans" and "together we turn the tide on pollution."

As the nail-biting results were being announced, the Israelis huddled with their Ugandan teammates before embracing the winning team in a feel-good ending.

"I can't believe it, it's a miracle," said Yamen Najjar, manager of Team Hope, which represents the Syrian refugees and was part of the winning alliance. "It was a very difficult competition for us, we faced a lot of problems, but we didn't lose hope."

Outgoing U.S. Energy Secretary Rick Perry, who'd made the original announcement that Dubai would host the event earlier this year in a surprise visit to the World Government Summit, was on hand. Perry said he's followed the robotics tournaments since 2002 when, as governor of Texas, he attended one of the regional competitions in Houston and was "blown away" by the passions and abilities of the young contestants.

But he said he found their camaraderie even more impressive.

"It is stunning what these young people are doing," Perry said. "Where the adults may have failed in the standpoint of international diplomacy, these young people may accomplish, and if that's the case maybe that is the most important thing that comes out of this."