Finding Rover takes facial recognition software most commonly used on humans and puts it to work on dogs and cats.

NORFOLK, Va. (AP) — An animal shelter in Virginia says it's hoping to harness the power of facial recognition to reunite missing pets with their owners.

News outlets report the Norfolk Animal Care and Adoption Center is joining a growing list of shelters using Finding Rover, an application created in 2012 that takes facial recognition software most commonly used on humans and puts it to work on dogs and cats.

The shelter will add photos of animals in its care to the app and local owners of missing pets are encouraged to do the same. The app then scans for matches.

The app creator previously told outlets that during tests, the software proved 98% effective with front-facing photos. He did note that the app is limited to the number of pets in its database. 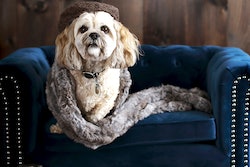