The proposal would target companies with annual worldwide revenue of at least $25 billion and force parts of Google and Amazon to operate separately. 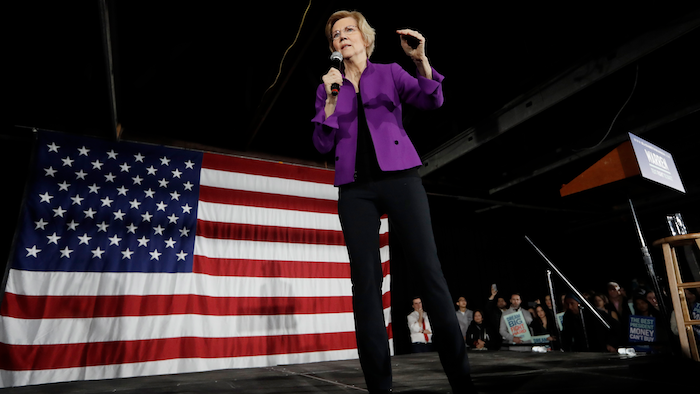 Democratic presidential candidate Elizabeth Warren on Friday rolled out a proposal to break up the biggest U.S. technology companies, saying they have too much control over the economy and Americans' lives.

In her pitch to rein in the influence of tech giants, the Massachusetts senator envisions legislation targeting companies with annual worldwide revenue of $25 billion or more, limiting their ability to expand and forcing parts of Google and Amazon's current business structure to operate as separate entities.

As president, Warren said she would pick regulators who would seek to break up what she called "anti-competitive mergers" such as Facebook's recent purchase of Instagram and Amazon's acquisition of Whole Foods.

She made the pitch ahead of a rousing town hall appearance Friday in the New York City neighborhood where Amazon recently scrapped plans to open a new headquarters.

It's Warren's latest effort to shape the policy agenda for the rest of the Democratic presidential primary, coming after earlier announcements of a "wealth tax" plan on households with high net worth and a universal child care proposal.

Her tech agenda, coming at a time of rising public concern about the growing power of the dominant players, could force the rest of her rivals for the 2020 nomination to follow her lead.

During remarks before a crowd of more than 1,000 people in Queens, Warren touted elements of her new tech-industry plan as part of her stump speech. She took aim at Amazon's search for lavish economic incentives from cities competing for its headquarters, likening the company's efforts to pit areas against each other to the dystopian film "The Hunger Games."

"That's what's wrong with the system. It's not just that big tech companies like Amazon have enormous market power, which they do. They have enormous political power," Warren told the audience, describing the industry's lobbying expenditures as a "good return on investment if they can keep Washington from enforcing the antitrust laws."

It remains to be seen whether Warren will introduce legislation in the current Congress aligning with the first element of her plan. A spokeswoman, Kristen Orthman, said a bill introduction was not imminent.

Warren's latest policy proposal also promised to be a central element of her scheduled visit Saturday to the South by Southwest conference in Austin, Texas.

Sen. Kamala Harris of California represents the tech industry's home state, while Sen. Cory Booker has come under scrutiny for his past ties to tech companies — though he's stepped up his criticism of the industry in recent years.

Facebook spokeswoman Monique Hall said the company had no comment on Warren's proposal. Representatives for Google, Amazon, Microsoft and Apple did not immediately respond to a request for comment.