Margrethe Vestager plans to end her term as the European Union's antitrust enforcer this year with a bang. 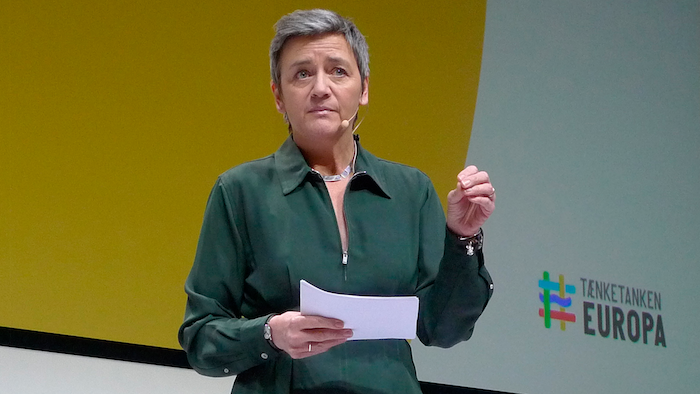 Silicon Valley's notorious nemesis, Margrethe Vestager, plans to end her term as the European Union's antitrust enforcer this year with a bang, laying out a long-term plan to intensify scrutiny of the world's big tech companies.

As the EU's competition commissioner, Vestager is arguably the world's most important tech regulator. Since 2014, she has slapped Google with eye-popping multibillion-dollar antitrust penalties, ordered Apple and Amazon to pay back taxes and fined Facebook over its WhatsApp acquisition — flagship enforcement cases that have struck fear into Silicon Valley while drawing attention in Washington.

Now, in her final year in office, the 50-year-old Danish politician is laying the groundwork for a new phase of regulation beyond the end of her term in October.

She's planning a report meant to guide EU competition policies in the era of digitization. Feedback from companies, business groups and experts shows many see the need for more regulation and when it's published in March, the report by three expert advisers will reflect the need for new or tougher rules, she told The Associated Press in a recent interview.

"The most important thing is that the majority of input is pro-enforcement," Vestager said during one of her frequent visits to Copenhagen from her Brussels base. The digital technology industry can no longer be allowed to shape itself, she added. "We are way beyond that."

It's unclear yet what shape the new enforcement will take but it may not bode well for the big U.S. technology companies that have landed in Vestager's crosshairs.

Vestager has cultivated a down-to-earth image — she likes to knit elephants during meetings — that belies her formidable powers of enforcement.

She opened three antitrust cases against Google, including one that resulted in a record 4.3 billion euro ($5 billion) fine for forcing cellphone makers to use the internet giant's software on Android phones. Another 2.4 billion euro ($2.8 billion) penalty was punishment for manipulating shopping search results. She aims to wrap up a probe before her term ends of whether Google blocked rivals from its Adsense ad service.

Vestager ordered Apple to pay back up to 13 billion euros ($15 billion) in back taxes from Ireland. Apple CEO Tim Cook called it "total political crap" and President Donald Trump referred to her as the "tax lady" who "really hates the U.S."

The EU competition commissioner, with a 900-strong staff, is unusually powerful in the Brussels bureaucracy because it can enforce bloc-wide rules, giving it the power to take on countries and companies. Other departments typically share regulatory duties with national governments. Vestager's job includes approving or rejecting mergers and investigating cartels and antitrust behavior. She also makes sure EU states don't give tax breaks to individual companies that are not available to other corporations — legitimate business strategy in the U.S. but illegal in Europe.

A lot of attention is now falling on data, the commodity that drives the digital economy.

Information collected by web browsers, apps, smartphones and other devices can be enormously valuable to companies because they can provide insight about, for example, an individual's buying habits and movements. Data can power artificial intelligence or be used to show targeted advertisements. Vestager is concerned that a small group of companies could corner the market and abuse their power.

She started confronting the problem with an informal probe launched last year into whether online shopping giant Amazon is using data to gain an edge on third party merchants, who are both its customers and rivals. She hopes to decide within six months whether to open a formal investigation.

Many people still aren't sure how to take control of their personal information. New European privacy rules introduced last year were a start, obliging companies to be more transparent with customers about what they do with people's data. But consumers are often still overwhelmed by detailed consent forms for third-party tracking on each new site they visit or the fine print of an app's service terms.

Vestager, a member of a small left wing political party who believes in free markets, said the private sector can play a role in finding solutions.

"I think you need products that will help you exercise your rights. Independent digital assistants that will make sure that your privacy settings are maintained no matter where you go. That kind of stuff," she said.

Vestager, whose party was founded by her great-grandfather, was Denmark's deputy prime minister and economy minister before taking up her post in Brussels in late 2014. She reportedly keeps a sculpture of a hand with an extended middle finger in her office, a gift from a Danish trade union angered by her welfare cuts. She's said to be one of the inspirations for the lead character in the Danish TV show "Borgen," about an ambitious minor politician trying to become the country's first female prime minister.

Although Vestager's term runs out in October, she's hoping for a second stint, an unlikely prospect because her party is out of power in Denmark and its prospects look uncertain in upcoming elections. The EU's executive commissioners are nominated by their country's governments.

"Sometimes things are unlikely but not impossible," Vestager said. "I'm in the middle of something and we're not done yet," she added, referring to the new era of digital regulation.

Vestager brushes off criticism that she's stifling innovation by targeting U.S. companies to help prop up European firms. She has also taken on Starbucks, McDonald's and this month opened an investigation into Nike's tax arrangements. But other targets have included Italian automaker Fiat and Russian gas giant Gazprom.

"When you look at our cases you'd see that what they have in common is not nationality. It's the fact that they're multinationals," she said.

Her aim, she says, is to keep competition fair.

"That was the idea before the world became digital," Vestager said. "And it becomes an even more important idea when the world becomes digital because things are so fast moving."