The $4.2 billion project missed its deadline by years due to embezzlement and design flaws. 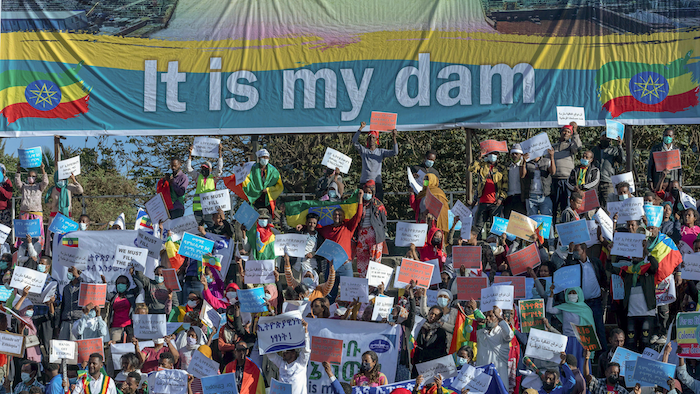 Ethiopians protest against international pressure on the government over the conflict in Tigray, below a banner referring to the Grand Ethiopian Renaissance Dam, Addis Ababa, May 30, 2021.
AP Photo/Mulugeta Ayene, File

NAIROBI, Kenya (AP) — Ethiopia has started generating electricity from the controversial mega-dam that is being built on the Blue Nile.

The milestone was reached on Sunday morning when one of the 13 turbines of the Grand Ethiopian Renaissance Dam started power generation in an event officiated by Prime Minister Abiy Ahmed.

“From now on, there will be nothing that will stop Ethiopia,” Abiy said.

The dam will be Africa’s largest hydroelectric dam upon completion.

“We just started generating power, but that doesn’t mean the project is completed,” said Kifle Horo, the dam’s project manager. “It will take from two and half to three years to complete it.”

The dam, which will have a total power generating capacity of 6,500 megawatts, has been a source of tensions between Ethiopia and the other riparian states, Sudan and Egypt. Ethiopia has already conducted two fillings of the dam, but the speed at which it will be filled and the amount of water that will be released during drought seasons remains unsolved.

Egypt fears a quick filling of the dam will reduce its share of Nile waters and seeks a binding legal agreement in case of a dispute.

Egypt’s Foreign Ministry said in a terse statement Sunday that Ethiopia’s move is another “breach” of the agreement of principles that the three countries signed in 2015. It didn’t elaborate.

Abiy, however, said the dam would benefit Egypt and Sudan as well.

“We want to export our pollution-free electricity to Europe through Sudan and Egypt, so the way forward is cooperation among us. Ethiopia doesn’t want and intend to harm anyone else,” he said.

Ethiopia contends the $4.2 billion dam is essential for its development and will enable it to distribute power to its population of more than 110 million.

Several rounds of talks have been held in attempts to solve the stalemate.

The dam’s construction started in 2011 and the completion date was missed years ago due to the embezzlement of funds and design flaws.