The White House hopes to build a pipeline from those schools into energy-related jobs. 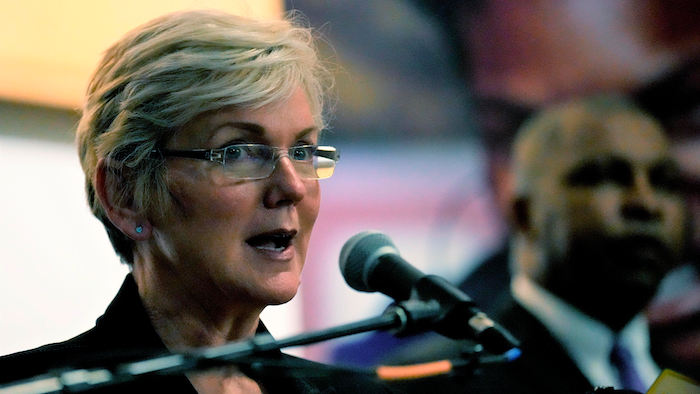 ORANGEBURG, S.C. (AP) — U.S. Energy Secretary Jennifer Granholm on Thursday announced that $3 million in federal funding would be directed toward historically Black colleges and universities, and other minority serving institutions, for research she said will further the Biden administration's goals of carbon neutrality and help strengthen a pipeline from those schools into energy-related jobs.

“This funding opportunity is for a set of technologies that actually will decarbonize power,” Granholm said during a stop in South Carolina, giving an example of combining coal waste with algae to create new substances, like plastics.

The announcement, Granholm said, helps advance work toward an executive order, signed by President Joe Biden last year, to make the federal government carbon-neutral by 2050. It aims for a 65% reduction in planet-warming greenhouse gas emissions by 2030 and an all-electric U.S. fleet of car and trucks five years later.

It would also help train a workforce to fill hundreds of jobs the Energy Department has said it needs to help fulfill mandates as laid out in the infrastructure package.

Granholm said schools will apply for the funding, which according to a notice filed in December “would also include projects that address the mitigation and remediation of legacy environmental impacts of coal-based generation.”

To make the announcement, Granholm chose South Carolina State University, the only HBCU in the country to have a four-year nuclear engineering program. Touring the Orangeburg school with alumnus and House Majority Whip Jim Clyburn, Granholm visited with engineering students, hearing their research presentations and also making a pitch that they choose to employ their talents with jobs in the public sector.

“My only question I have: can you come and work for the federal government?” Granholm asked, after one student's presentation. “You'll be a hot ticket wherever you go.”

The visit, Granholm’s first to South Carolina as secretary, comes as Biden and other officials tout progress made in implementing the administration’s $1 trillion bipartisan infrastructure package, following setbacks on other major policy issues including voting rights and other economic efforts.

Also Thursday, Biden traveled to Ohio to tout a $1 billion infusion from the deal that he said would restore the Great Lakes harbors and tributary rivers that have been polluted by industrial toxins.

“We want people to see the benefit of the votes that were cast for them and for their communities,” Granholm said, when asked how the rollouts make the administration's case ahead of the midterm elections in November.

The funding announcement also couples with the administration's efforts to diversify energy sector jobs by directing funds to HBCUs. In June, the Energy Department awarded more than $2.85 million aimed at nuclear and particle physics research trainee programs for students at HBCUs and other minority-serving institutions.

At Howard University in May, Granholm announced more than $17 million in funding to support college internships, research projects and opportunities to bolster investment in underrepresented HBCUs and other minority-serving institutions.

S.C. State is often a popular stop for national-level Democrats campaigning in South Carolina, thanks in part to the area’s heavily Black and Democratic electorate, as well as its connection to Clyburn, the state’s sole congressional Democrat and the highest-ranking Black member of Congress.

Clyburn’s public endorsement of Biden ahead of South Carolina’s 2020 Democratic presidential primary helped the then-candidate overcome a string of earlier losses, serving as an awaited signal for many Black voters that Biden would be the candidate to stand up for their interests.

But Republicans, including former U.N. Ambassador and South Carolina Gov. Nikki Haley, have also toured the nuclear research facilities, with Haley stopping by the school in April in one of her first public appearances since moving back to her home state and possibly ramping up for a future run at higher office.

At Clyburn’s behest, Biden gave the December commencement address to S.C. State graduates, saying he would be “proposing historic investment to create and expand HBCU programs in high-demand fields like cybersecurity, engineering and health care.”

On Thursday, Clyburn said he felt Granholm's visit “is going to be very, very important for her, and for us, to be able to fit the needs of the state and the communities that are represented on this campus.”