North Dakota's governor says shutting the project down during a review “would have devastating consequences for the state.” 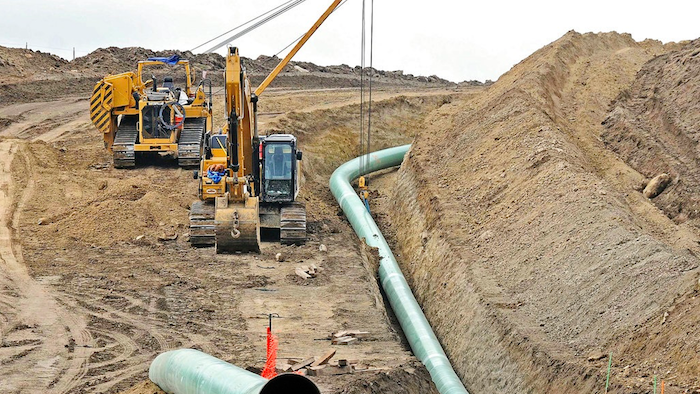 Heavy equipment at a site where sections of the Dakota Access pipeline are being buried near St. Anthony, N.D., Oct. 5, 2016.
Tom Stromme/The Bismarck Tribune via AP, File

BISMARCK,N.D. (AP) — North Dakota Republican Gov. Doug Burgum is asking the U.S. Army Corps of Engineers to argue for keeping the Dakota Access oil pipeline operating while it conducts an environmental review on the project.

A federal judge has asked the Corps to explain how “it expects to proceed” now that court rulings have determined that the pipeline is operating without a permit to cross beneath Lake Oahe, a reservoir along the Missouri River that is maintained by the Corps.

A hearing on the matter originally scheduled for Wednesday has been postponed to April 9.

Burgum's letter to the Corps said that shutting down the pipeline during the review “would have devastating consequences for the state” and a “chilling effect on infrastructure investment” across the country.

U.S. District Judge James Boasberg in April 2020 ordered further environmental study. He said the Corps had not adequately considered how an oil spill under the Missouri River might affect fishing and hunting rights for the Standing Rock Indian Reservation, which straddles the North and South Dakota border, or whether it might disproportionately affect the tribal community.

Burgum said to stop the flow of oil after more than three years would be a blow to a country that is in "desperate need of infrastructure upgrades, jobs and economic activity to accelerate recovery from the COVID-19 pandemic.”