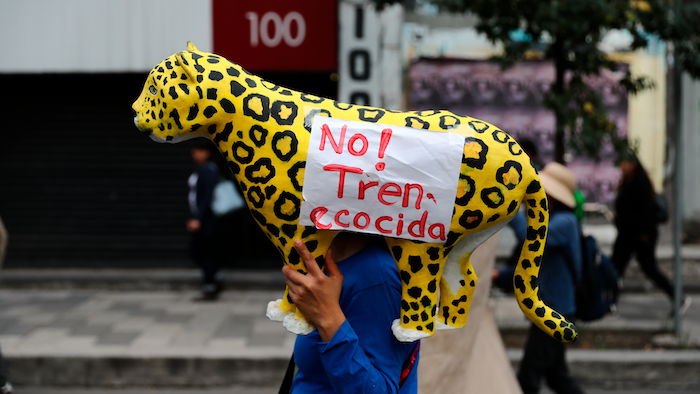 MEXICO CITY (AP) — More than 1,000 people marched through the center of Mexico City on Friday in opposition to the government's largest infrastructure projects.

The protest brought together unions, environmentalists, students and representatives of Mexico's indigenous peoples, a mix that would seem a natural base for populist President Andrés Manuel López Obrador, but which has become among his most vocal critics.

Erika Cortéz, a member of the Popular Organization Francisco Villa of the Independent Left from the Mexico City borough of Iztapalapa, said she opposed the president's Maya Train project that would move tourists around the Yucatan Peninsula.

The train is one of López Obrador's signature initiatives, which he says will spur economic development in Mexico's southeast, but has faced criticism for its environmental impact.

Other demonstrators voiced opposition to a rail line that would traverse Mexico's isthmus connecting the Pacific Ocean and Gulf of Mexico and a huge new oil refinery and a gas-fired power plant.

Karina Leyte, from San Francisco Tlatenco, walked with a papier-maché jaguar that read “No ecocidal train.”

“I'm against the mega-projects that affect the people ecologically, economically, culturally and politically," Leyte said.

Leyte admitted she voted for López Obrador as “the least bad” choice, but said she has been disappointed. “It confirms what we thought — that he was going to sell out.”

The march came one day after the anniversary of the death of activist Samir Flores Soberanes, who had protested the gas-fired power plant in Morelos state. Flores was killed days before a referendum on the nearly completed project and his slaying remains unsolved.

Many in Friday's march carried signs referencing Flores' death. An assembly of indigenous peoples and their allies was scheduled for Saturday in the Morelos town of Amilcingo.