Critics said the decision undercuts a new state law requiring new houses to have their own solar power. 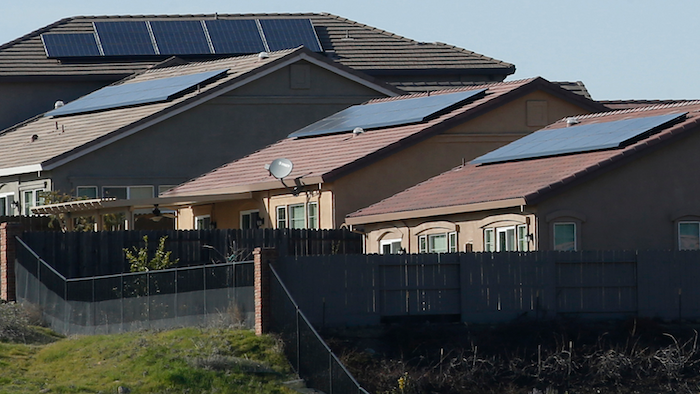 SACRAMENTO, Calif. (AP) — Over the objections of environmentalists, California regulators approved a proposal Thursday to allow builders to construct homes without solar panels, a decision critics said undercuts California’s seven-week-old law that all new houses have their own solar power.

At a passionate hearing, the California Energy Commission unanimously approved the Sacramento Municipal Utility District's plan to build its own large-scale solar site that homeowners can tap into, forgoing the need for solar on each new home.

Environmentalists said it guts the state's new landmark mandate and will lead to other statewide proposals copying Sacramento's utility, which serves 1.5 million residents. But regulators backed the proposal after support from home builders and lawmakers who said it provides clean energy without raising home prices in a state facing a housing crisis.

“This is something that is bold and cutting edge,” Commissioner Janea Scott said of the Sacramento Municipal Utility District's application.

The mandate that took effect Jan. 1 calls for new single-family houses or low-rise apartments to install solar panels. Alternately, utilities and organizations can apply to the California Energy Commission to build an offsite "community shared solar" site for buildings to draw from.

Using the latter option, the Sacramento Municipal Utility District's plan sets a blueprint for private and public entities to seek their own large solar sites to meet the mandate, watchers say. The largest public utility in the U.S. — the Los Angeles Department of Water & Power — endorsed the idea in filings to the commission.

Public testimony ran for two hours at the commission meeting Thursday. Environmentalists and some homeowners said the move means fewer homes will be built with solar panels included. Solar advocates said consumers would save more money with their own solar panels rather than the savings from the Sacramento Municipal Utility District's proposed plan.

“The world looked up to us when we passed the solar homes mandate,” said Sacramento activist Laurie Litman, calling the new proposal “unacceptable.”

Supporters, including a dozen unionized workers at the Sacramento Municipal Utility District, said the utility's option will give homeowners a chance to tap into solar power without needing to maintain their own panels.

“The community solar option is just that — it's an option,” said Drew Bohan, the executive director of the energy commission. “To some homeowners it's going to be very attractive.”

Many critics filled their one-minute allotted time to testify with passion. “My eight-year-old is terrified about climate change,” said Mo Kashmiri, a Sacramento homeowner, adding: “Blocking rooftop solar for most of the consumers is not the path forward.”

Meanwhile, when engineers and workers at the Sacramento utility spoke in favor, many of their colleagues clapped and cheered. The Sacramento Municipal Utility District's alternative "doesn't saddle low-income customers with costs that they don't deserve,” said Hunter Stern of the local IBEW union that represents utility workers.

The mandate of a panel on every roof was seen as a revolutionary model for other counties and states when the California Energy Commission originally approved it in 2018. The provision allowing a offsite solar site was less noticed, loosely worded to allow for buildings that can't support solar onsite to comply with the mandate by using a nearby solar facility.

Energy Commissioner Andrew McAllister said the provision was intentionally vague because "we wanted to see some innovation."

One senator who disagreed, Scott Wiener, a Democrat from San Francisco, said that the Sacramento Municipal Utility District's proposal is “anti-rooftop” because it is “an effort to shift away from rooftop solar and to utility-scale solar.”

Many environmentalists agreed and said the Sacramento Municipal Utility District's large-scale solar plan went dramatically beyond the spirit of the exception spelled out in the mandate. They said "community shared solar" sites ought to be small and close to buildings being served, adding that the state needs both utility-scale solar but also rooftop on as many homes as possible.

The Sacramento Municipal Utility District counters that homeowners can still apply with the utility to install rooftop solar panels if their energy use demands it. The utility, which serves Sacramento County and parts of neighboring counties, says its program would guarantee a financial benefit of $10 kW per year for 20 years.

“Both rooftop and community solar have unique benefits," said Steve Lins of the utility district. “But at the end of the day, they both reduce carbon.”