Some structures were completely consumed by the blaze. 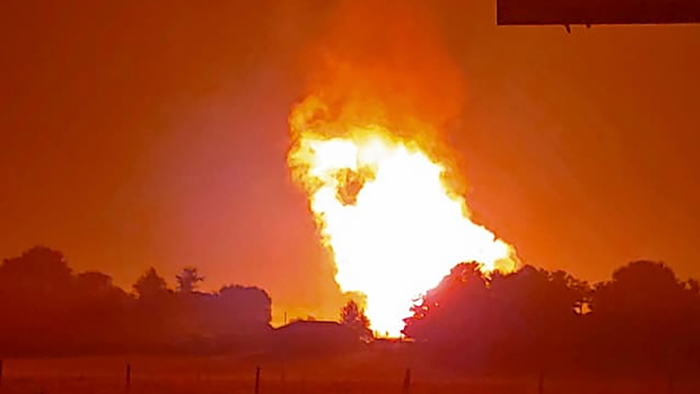 In this Thursday, Aug. 1, 2019 photo provided by Naomi Hayes, a fire burns after an explosion near Junction City, Ky. A regional gas pipeline ruptured early Thursday in Kentucky, causing a massive explosion that killed one person, hospitalized five others, destroyed railroad tracks and forced the evacuation of a nearby mobile home park, authorities said.
Naomi Hayes via AP

Some structures were completely consumed by the blaze, and five to seven people were unaccounted for when firefighters extinguished the flames hours later, Lincoln County Emergency Management Director Don Gilliam said.

"The part of the area that has been compromised, there's just nothing left," Gilliam said when asked whether residents might return to their trailer homes. "The residences that are still standing or damaged will be accessible. There doesn't really look like there's any in-between back there. They're either destroyed or they're still standing."

The 30-inch (76-centimeter) wide pipeline moves natural gas under such high pressure that the flames reached about 300 feet in the air and could be seen throughout the county, he said.

The explosion around 1 a.m. was so huge that it showed up on radar, according to a tweet from WKYT-TVmeteorologist Chris Bailey. It took hours for firefighters to douse the flames, with trucks repeatedly refilling their tanks and returning to the scene.

Emergency managers said the rupture involved the Texas Eastern Transmission pipeline, which is owned and operated by Enbridge. The pipeline stretches more than 9,000 miles, from the Mexican border in Texas to New York City. A statement from the company based in Calgary, Canada, said "Enbridge is aware of and is responding to a rupture on the Texas Eastern system in Lincoln County."

Some 75 people in the Indian Camp trailer park in the Moreland community were evacuated to the New Hope Baptist Church in Stanford. Gilliam encouraged anyone who fled the scene and hasn't been accounted for to check in at the church. Authorities also urged people gathering for the multistate 127 Yard Sale to stay away as crews worked to contain the damage.

Gilliam said residents whose homes are still standing should be allowed back in later in the day.