Former miners, who say they haven't been paid by bankrupt coal company Blackjewel, camped on tracks in eastern Kentucky. 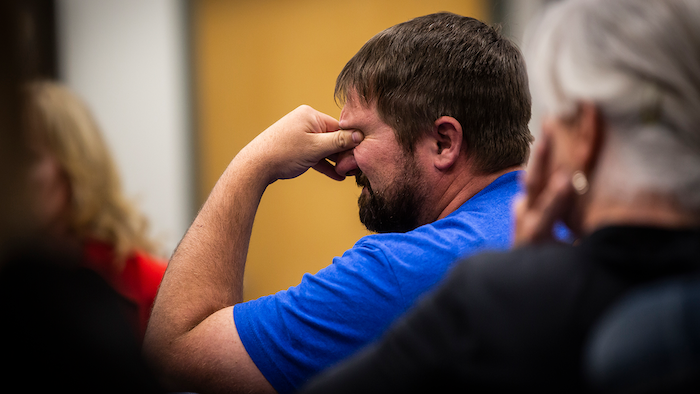 A man reacts after a Blackjewel employee mentions not being able to deposit the cashiers check he received from the company during a public meeting at the Campbell County Courthouse in Gillette, Wyo., Tuesday afternoon, July 2, 2019.
Josh Galemore/The Casper Star-Tribune via AP

HARLAN, Ky. (AP) — Former Kentucky miners who say they haven't been paid by bankrupt coal operator Blackjewel LLC were blocking train tracks Tuesday as part of a protest against the company.

More than 20 miners and their families camped on tracks near Cumberland on Monday night to try to block trains hauling coal from a mine in Cloverlick, new outlets reported. Several were still there Tuesday morning holding signs that say "no pay, we stay." Miners allowed a train to pass Monday after police arrived, but have continued to protest and have again blocked the tracks.

Cumberland Mayor Charles Raleigh said the protesters don't seem worried about the potential to be arrested for trespassing and are spending their time playing cornhole.

A federal judge approved a bidding process last week for Blackjewel mines. The fate of mines in Kentucky, West Virginia and Virginia that had employed about 1,100 miners depends on the outcome.

Raleigh said miners are upset because the bankruptcy court has approved nearly $8 million in loans for Blackjewel since the bankruptcy, but there's still no money to cover bounced paychecks. He said the protesters have plenty of support including people who would post bail money if anyone is arrested.

Blackjewel said in a statement to employees on Tuesday that it is working toward a resolution.

"We know how eager you all are to understand what will happen to your mine and whether you will be able return to work," the company said in its statement. "We share this desire and assure you that we are doing everything possible to bring as many employees as possible back to work as quickly as possible."

A spokeswoman for CSX Corporation told the Lexington Herald-Leader that the rail company is monitoring the situation and hopes it is resolved quickly. The company was not able to say who bought the coal or hired CSX to move it.

Kentucky Gov. Matt Bevin's spokeswoman, Elizabeth Kuhn, said the Republican governor "remains committed to using every tool available" to assist the miners. Bevin's administration is investigating the miners' lost wages and providing staff to help in processing their unemployment insurance applications, she said in a statement.

The state's attorney general, Andy Beshear, weighed in on Twitter with support for the miners and said he had directed his office to support their cause in any way it can. Beshear, a Democrat, is challenging Bevin in Kentucky's gubernatorial election in November.

State Rep. Adam Bowling, R-Middlesboro, joined the miners Tuesday, saying he wants the miners to know state officials will advocate for their pay.

Jeffrey Willig, a father of six, said his bank account was overdrawn after his last paycheck from Blackjewel bounced. He says he and others plan to block the tracks "as long as it takes."

"We're not expecting our jobs back, we just want our money," Willig said.