The measure would roll back Obama-era rules reducing oil and gas industry leaks of methane gas, one of the most potent agents of climate change. 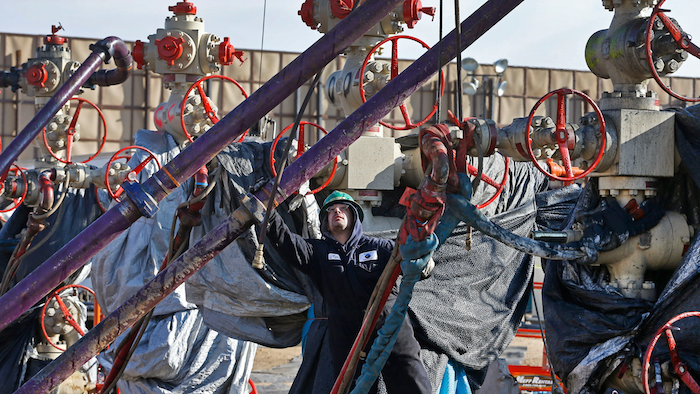 In this March 25, 2014 file photo, a worker adjusts pipes during a hydraulic fracturing operation at a well pad near Mead, Colorado.
AP Photo/Brennan Linsley, file

The Trump administration moved closer Tuesday to rolling back Obama-era rules reducing oil and gas industry leaks of methane gas, one of the most potent agents of climate change.

The Environmental Protection Agency formally released its proposed substitute for a 2016 Obama administration rule that aimed to step up detection and elimination of methane leaks at well sites and other oil and gas facilities. The agency's move is part of a broad Trump administration effort to undo President Barack Obama's legacy programs to fight climate change by cutting emissions from oil, gas and coal.

The EPA's proposal Tuesday conceded that relaxing the Obama-era rule for methane leaks at oil and gas sites would put an additional 380,000 tons (350,000 metric tons) of methane into the atmosphere from 2019 to 2025. The amount is roughly equivalent to more than 30 million tons (27 million metric tons) of carbon dioxide, another fossil-fuel emission that receives far more attention in efforts to slow climate change.

The EPA noted that overall increased pollution as a result of its proposal "may also degrade air quality and adversely affect health and welfare." Relaxing federal oversight will save $75 million in regulatory costs annually, the agency said.

Kathleen Sgamma, president of the Western Energy Alliance, a Colorado-based group that represents more than 300 companies, said the proposed changes make the EPA rule more efficient and workable. The previous rule was overly burdensome and "full of red tape. This rule cleans that up, makes it more practical" for industry to comply, Sgamma said in an interview.

Oil and gas drillers have "a four-decade long trend to reduce emissions," and the new EPA rules recognize that reality, Sgamma said, adding that she hopes an Interior rule to be finalized in coming days will show a similar practical streak. The pending rule by the Bureau of Land Management applies to fracking sites on public lands.

Environmentalists contend energy companies already have demonstrated they can comply with tougher monitoring and that only poorly operated companies were having trouble with the new requirements.

"Once again, the Trump administration is putting the interests of the worst-operated oil and gas companies ahead of the health and welfare of everyday Americans," said Matt Watson, an associate vice president at the Environmental Defense Fund.

Democratic Gov. Jerry Brown of California on Tuesday told a meeting in San Francisco ahead of a climate conference there that President Donald Trump's proposal to ease monitoring of methane releases is "insane" and "borders on criminality."

"It perhaps is the most obvious and dangerous and irresponsible action by Mr. Trump — and that's saying quite a lot," Brown said.

The EPA under Obama completed the existing rule in May 2016, and it took effect that August. Industry groups pushed the EPA to reconsider, and the Trump administration put parts of it on hold in May 2017.

The rule was reinstated by the U.S. Court of Appeals in Washington, D.C., last year after environmental groups sued, and it remains in effect, according to the EPA.

Tuesday's action opens a 60-day period for public comment ahead of any final decision by the Trump administration.

In North Dakota, the nation's biggest oil-producing state after Texas, drillers scaled back production for a time this summer to keep so-called flaring — burning off of methane and other gases pumped up as waste byproducts with the oil — within state limits.