Ionity, the joint venture created to build the network, has completed more than 200 stations and expects to have 400 by the end of the year. 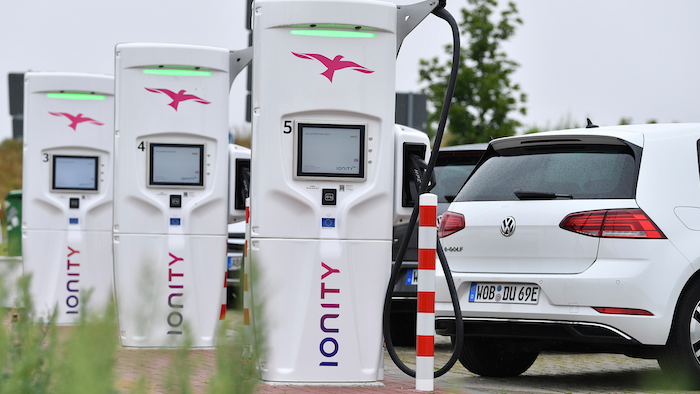 Ionity, the joint venture created among automakers to build the network, said Thursday it has completed more than 200 stations and expects to have 400 operating by the end of the year. Each station has 4-6 charging columns.

The highway network is seen as a key step in convincing car buyers they can switch to electrics and still take long highway trips without worrying about running out of juice during a family vacation.

Ionity CEO Michael Hajesch gave the progress update as the company unveiled the price for electricity at its high-speed stations in 20 — soon to be 24 — countries. Munich-based Ionity is a joint effort among BMW, Daimler, Ford, and Volkswagen Group, which also includes Audi and Porsche.

Last year, battery-powered cars accounted for only 2% of the market in Europe but manufacturers need to sell more to meet tougher European Union limits on greenhouse gas emissions coming into effect from 2021. Carmakers that don't meet the limits face fines of thousands of euros per vehicle.

The network is also a response to California-based electric car maker Tesla, which has its own charging network. The Ionity network will be open to Tesla owners.

Hajesch said Ionity would charge 79 euro cents per kilowatt hour for customers who don't have a contract with a mobility service provider for a different rate. That replaces the previous price of 8 euros ($8.80) per charging session.

The new price to charge up quickly on the highway and be on one's way is higher than what car owners typically pay to charge overnight at home, where charging might cost around 30 euro cents per kilowatt hour but takes hours. Ionity's 350-kilowatt stations mean charging could be completed in as little as 10-15 minutes for cars that can take full advantage; other models will charge more slowly.