The state's program to entice more EV purchases has gotten less generous, especially for those looking to buy luxury models. 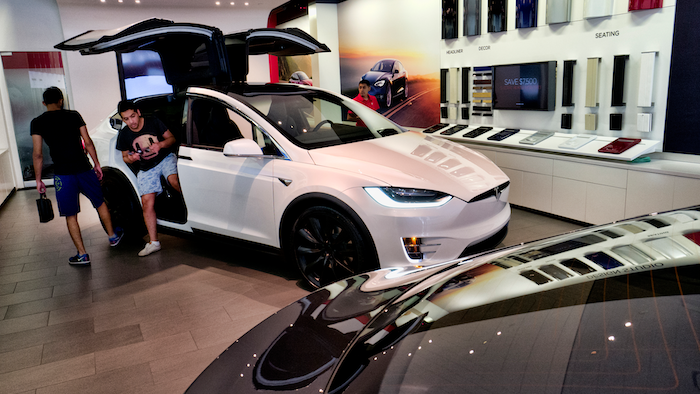 In this Aug. 8, 2018, file photo, customers check out the Tesla X at the Tesla showroom in Santa Monica, Calif.
AP Photo/Richard Vogel, File

The San Francisco Chronicle reports that effective Tuesday, regulators have stopped offering rebates for buyers of electric cars or plug-in hybrid vehicles that cost more than $60,000.

The state Air Resources Board, which regulates the program, also reduced the standard rebate by $500 per vehicle, from $2,500 to $2,000 for all-electric cars. In addition it eliminated rebates for plug-in hybrid cars with an electric-battery range of less than 35 miles.

Agency officials said the changes will ensure that more people will receive rebates, particularly those with low incomes.

Some advocates for clean cars have criticized the move, saying reducing rebates could deter buyers at a crucial time, as electric car sales spike following years of sluggish growth. Electric cars are typically more expensive than comparable gas-powered models. The state rebates, combined with a federal tax break, can cut thousands of dollars off the sticker price.

Melanie Turner, a spokeswoman for the Air Resources Board, told the newspaper that the new rules put an emphasis on rebates for disadvantaged communities, including areas with higher pollution and lower incomes.

Under the rules, low-income buyers will still be eligible for higher rebates, which are unchanged: $4,500 for all-electric cars and $3,500 for hybrids that run on a combination of gas and plug-in battery.

“California simply cannot meet its clean air or climate goals without transforming and cleaning up all our cars and trucks with an emphasis on putting ultra-clean vehicles in communities that need them the most, which are those most impacted by pollution,” Turner said in an email.

California leads the nation in electric-car sales, and the state has issued rebates to 354,064 car buyers since its program began in 2011, according to the Chronicle. About 5% of rebates have been earmarked for low- and moderate-income people, currently defined as those earning less than $50,730 for a household of two.

Assemblyman Phil Ting, a San Francisco Democrat and vocal advocate for electric cars in the state Legislature, criticized the changes. He said the new rules create confusion for buyers.

Ting sponsored a bill this year that could have tripled rebates, but it died in committee. He told the newspaper that the state should ramp up incentives and decrease them over time with a specific end date, so people have incentive to buy now.

The Air Resources Board plans to spend $238 million on rebates this year.

Joel Levin, executive director of Plug In America, an advocacy group for electric-car drivers, said some of the changes are discouraging, including smaller rebates and a more complicated maze of regulations.

But he said the changes are positive because low-income people get priority.

“It’s a myth that they’re only expensive cars for rich people,” Levin said of electric vehicles. “The truth is they’re fundamentally better cars — we just need to get pricing to the right point for people.”