The automaker expects more charges later this year as part of an $11 billion overhaul. 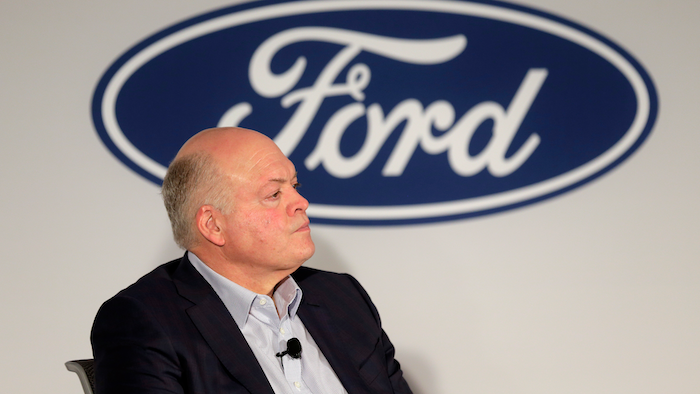 DEARBORN, Mich. (AP) — Ford's net profit tumbled 86% in the second quarter due largely to restructuring costs in Europe and South America, and the company said more shake-ups are coming.

Chief Financial Officer Tim Stone said Wednesday that the company booked charges of $1.2 billion during the quarter as it moved to close factories in Europe and South America.

And, despite the factory closings and cutting 7,000 white-collar jobs globally, Ford says it isn't done overhauling its operations.

Stone said Ford is in the early stages and expects up to $1.8 billion more in charges later this year as part of an $11 billion overhaul during the next several years. He wouldn't give further details on what remains, saying management hasn't decided on ideas to further redesign Ford.

"We're already starting to see some early benefits," he said. "A lot of work to do."

Some of Ford's previously announced restructuring moves have yet to be fully placed on the books.

Ford's net income for the April-through-June period dropped to $148 million, or 4 cents per share. Without the charges the company made 28 cents per share. Revenue was flat at $38.9 billion.

On average, analysts surveyed by FactSet expected earnings 31 cents per share on revenue of $38.49 billion.

Ford, which released numbers after the markets closed Wednesday, also said its results include a $181 million valuation loss on an investment in a software company, trimming 4 cents off adjusted earnings per share.

Ford on Wednesday forecast pretax adjusted earnings of $7 billion to $7.5 billion for all of 2019, compared with $7 billion last year. The company previously had only said that pretax earnings would improve.

Stone said the company's free cash flow improved by 80% to $2.1 billion in the first half of the year.

But Ford's second-half pretax earnings could fall by about $1 billion compared with the first half. Stone told analysts on a conference call that is due to the cost of launching new vehicles globally in the second half. The company is rolling out new Ford Kuga and Escape and Lincoln Corsair SUVs, as well as a two-ton Transit van and new heavy-duty F-Series pickups by the end of the year.

Ford's U.S. sales fell nearly 5% in the second quarter, according to the Edmunds.com auto pricing site, as the company exited most of its passenger car business. But Stone said sales of the new Ford Ranger small pickup offset much of that as its share of the small truck segment rose 14%. Edmunds, which provides content for The Associated Press, said Ford's average vehicle sale price rose 2.8% to $41,328 during the quarter.

In North America, Ford's biggest profit center, pretax earnings fell 3% to just under $1.7 billion, which the company blamed on switching its Chicago factory to build new versions of midsize SUVs. In Europe, the company showed its first year-over-year improvement in two years with a pretax profit of $53 million versus a $73 million loss last year. Ford's loss in China shrank 68% to $155 million. The South America loss widened 15%, though, to $205 million. Middle East and Africa swung to a loss of $45 million from a profit of $49 million.