Chairman Jean-Dominique Senard said the French government's resistance to a merger with Fiat Chrysler came at a particularly critical time for the global auto industry. 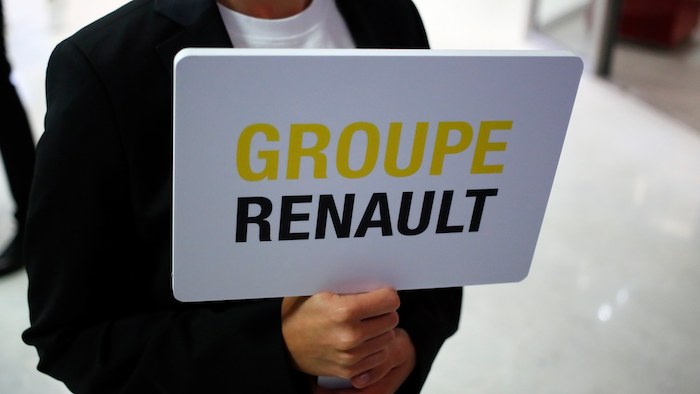 A hostess holds a sign to show the way for the Renault shareholders general meeting in Paris, Wednesday, June 12, 2019.
AP Photo/Francois Mori

Renault's chairman on Wednesday expressed his frustration with the French government for resisting a merger deal proposed by rival carmaker Fiat Chrysler, and at a critical time — ahead of what he views as a coming "tsunami" from China's auto industry.

Jean-Dominique Senard told a shareholders' meeting in Paris that "I have rarely seen a merger proposal that could give so much positive synergy, incredibly validating and robust."

He said that at a board meeting convened to discuss the plan, everyone had approved the plan "with enthusiasm" except one. Board members from Renault's alliance member, Nissan, abstained but in a "very positive way."

Senard said the French government, which is Renault's biggest shareholder with a 15% stake, had not shared his analysis of the benefits of the merger "at this stage."

"I can frankly say that disappoints me," he said.

Senard opened to the possibility of reopening talks, saying that the merger proposal "remains in my head potentially remarkable and exceptional."

Fiat Chrysler had proposed a 50-50 merger that would have created the world's third-largest carmaker worth almost $40 billion. But the role of Nissan, Renault's longtime alliance partner, was unclear and the French government wanted more time to sort out the details. Fiat Chrysler pulled the proposal, citing political conditions in France.

Renault's alliance with Nissan has become strained since the arrest last November in Tokyo of former chairman and CEO Carlos Ghosn, who is no longer in the company. Ghosn has been charged with falsifying financial reports in under-reporting compensation and breach of trust in having Nissan Motor Co. shoulder investment losses and paying a Saudi businessman.

The upheaval led to a restructuring of Renault with Senard brought in and Thierry Bollore becoming the new chief executive.

While the Ghosn saga dominated headlines for months, it was the merger failure that was on the minds of many shareholders on Wednesday.

"I was surprised to see FCA (Fiat-Chrysler Automobiles) pose an ultimatum, saying it's 'Take it or leave it and we won't let you take the time to think about it,'" said Herve Charron, a retiree heading into the meeting. "It's a bit scandalous. When the stakes are at 30 billion euros, you have to think and take your time."

Another shareholder was more philosophical.

"I was quite surprised (after negotiations with Fiat-Chrysler fell through) but that's business. Half of all mergers go awry. This one didn't even happen!" said Daniel De Rincquesen.

"We face a period in which the blossoming of the Chinese industry will probably translate into a form of tsunami" in our region, Senard said. Anticipation and strength are essential, he added.

Senard said he quickly realized that a merger with Fiat Chrysler had something for both Renault and the alliance between Renault, Nissan and Mitsubishi.