General Motors disclosed a potential sale of its shuttered Lordstown, Ohio, factory to Workhorse Group, as well as plans to invest $700 million elsewhere in the state. 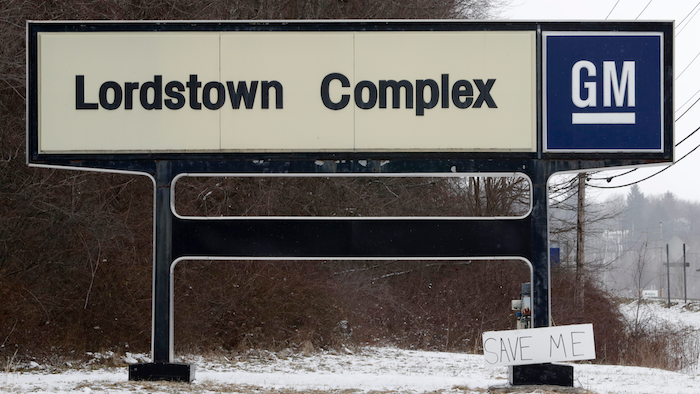 General Motors is negotiating the sale of its shuttered factory in Lordstown, Ohio, to a company that builds electric trucks.

The company confirmed Wednesday that it's in talks with Cincinnati-based Workhorse Group to sell the huge facility, and also announced plans to invest $700 million in three Ohio factories to create 450 additional jobs.

The potential sale, first announced on Twitter by President Donald Trump, could preserve some jobs at the sprawling plant 60 miles east of Cleveland. But it also dashes any hope that GM would reopen the factory where until March, it had built cars for more than five decades.

Workhorse Group, led by Workhorse founder Steve Burns, would acquire the facility and would hold a minority stake in a new venture, a GM statement said. But it was unclear who would own the rest.

"This potential agreement creates a positive outcome for all parties involved and will help solidify the leadership of Workhorse's role in the EV community," said CEO Duane Hughes.

The company would build a commercial electric pickup truck if it buys the facility, Burns said in the statement.

Should the project go forward, initial job numbers would be in the hundreds, said Ohio Gov. Mike DeWine, moments after fielding a call from GM CEO Mary Barra. That number could rise to 3,000 over several years if Workhorse were to win a contract with the U.S. Postal Service, DeWine said.

"We have people who are I would say knowledgeable about the negotiations who have told us that. That would be one of the goals of the company as they grow their business — to get a contract with the post office," DeWine said.

DeWine said he welcomed the news but said a lot depends on upcoming UAW negotiations and the union's reaction. "It would appear that with this company that there is potential for growth and maybe significant potential growth, which is what we want," he said.

Lordstown Mayor Arno Hill said he's waiting for details, including how many people might be employed. "It's definitely better than having 6 million square foot building sitting empty," he said.

But news of the pending sale was greeted gloomily by workers in Lordstown who were hoping that GM would reopen the factory that stopped producing the Chevrolet Cruze compact car in March.

Tim O'Hara, vice president of the United Auto Workers union local at the plant, said workers were hoping the union could negotiate a new product for Lordstown, allowing them to stay in the area and continue careers with GM. Many will be forced to transfer in order to preserve seniority and pension eligibility, O'Hara said.

"I guess that means they're done in Lordstown," O'Hara said of GM. "Anybody that wants to continue working for them is going to have to transfer out."

Lordstown had about 1,400 hourly workers on one shift at the time the plant stopped production. But hundreds of others had been laid off earlier as GM cut two shifts to deal with slumping demand for the Cruze.

Terry Dittes, the UAW's national vice president, said in a prepared statement that the company should still assign a new product to Lordstown and keep the plant open. The union has sued over the closure of Lordstown and three other U.S. plants, saying the moves violate GM's contract with the union.

GM said the 450 jobs would be added at plants in Toledo, the Cleveland suburb of Parma and the Dayton suburb of Moraine.

The Moraine plant would get expanded diesel engine production for GM heavy-duty pickups, while a Toledo transmission plant will add workers to build 10-speed truck transmissions. A stamping plant in Parma, near Cleveland, will see expanded production and new laser welding technology, the company said.

GM said more than 1,350 blue-collar workers have accepted transfers to other GM factories from four U.S. plants that are slated to close.

Trump happily tweeted the news about Lordstown after a conversation with Barra, calling the announcement "great news for Ohio." Lordstown had been pulled into the 2020 presidential campaign as Trump has pressured companies to add jobs in the U.S. Ohio is key to Trump's re-election campaign, and he has attacked GM for plans to close the plant as part of a larger restructuring effort.

Workhorse CEO Hughes said Tuesday the company is making progress in the transition from development to the production. The company is on target, he said, to begin delivering its new electric vans at the end of this year.

The announcement came just after GM and the Canadian auto workers union reached a deal to save 300 jobs at an Ontario factory that is slated to close by the end of this year. They'll work in a parts-stamping operation that will continue to make components for GM vehicles as the company seeks other business.

But the remainder of the 2,600 workers at the plant in Oshawa, near Toronto, are still scheduled to be laid off.

The investment will help the company develop a "last-mile delivery ecosystem that’s fast, low-cost and scalable."
Apr 15th, 2021
Follow Us
Most Recent