In public hearings last year, the idea of imposing import taxes on autos drew almost no support, even from the U.S. auto industry. 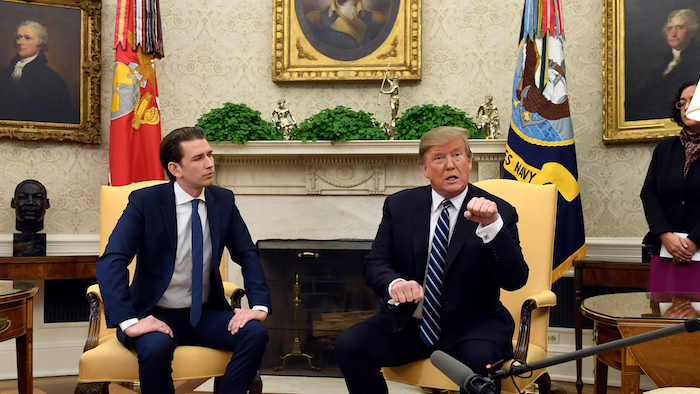 President Donald Trump said Wednesday that tariffs on autos imported from Europe are something "we certainly think about" as the White House reviews a Commerce Department report on whether imported vehicles and parts pose a threat to U.S. national security.

Trump made it clear that any final decision on the matter hinges on trade negotiations between the United States and the European Union. In public hearings last year, the idea of imposing import taxes on autos drew almost no support, even from the U.S. auto industry.

"If we don't do the deal, we'll do the tariffs," Trump told reporters before a meeting with Austrian Chancellor Sebastian Kurz.

Trump described the U.S. and Austria as having a "great trade relationship." But he complained about the U.S. running a trade deficit with the EU that he estimated at about $151 billion annually. Trump said the EU is "very tough to make a deal with."

The Commerce Department has been investigating whether imported vehicles and parts pose a threat to national security. The president could impose tariffs if the department concludes they are a threat. Trump was asked whether the department's report had changed his mind on imposing tariffs.

He described the Commerce Department report as a "study that's underway," but the "bottom-line result is whether or not we can make a deal with the EU"

In addition to imposing tariffs on steel and aluminum, Trump has imposed tariffs on dishwashers, solar panels and hundreds of Chinese products. Targeting autos would further raise the stakes. The United States imported $340 billion in cars, trucks and auto parts in 2017.