The automaker's former chairman, in his first interview since his arrest in November, blamed fellow executives who were opposed to closer ties with Renault. 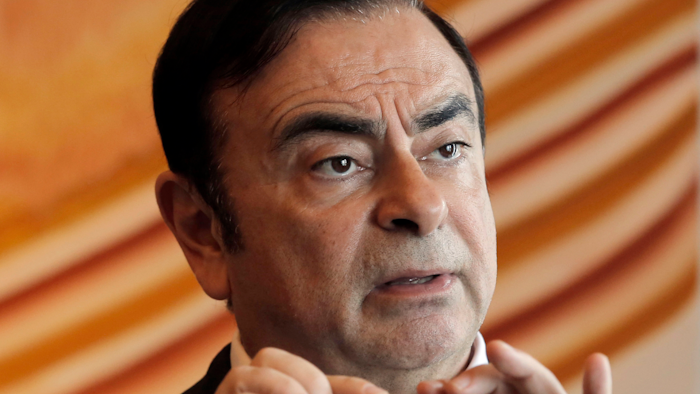 Nissan's former chairman Carlos Ghosn, in his first interview since his arrest in November, blamed fellow executives opposed to forging closer ties with the automaker's French alliance partner Renault for scheming against him, the Japanese newspaper Nikkei reported Wednesday.

The financial daily said it spoke with Ghosn for 20 minutes earlier in the day at the Tokyo Detention Center, where the 64-year-old star executive has been held since Nov. 19.

Earlier, Ghosn only was allowed visits by his lawyers and embassy officials.

Prosecutors have charged Ghosn with falsifying financial reports in under-reporting his compensation. He has also been indicted on charges of breach of trust related to his handling of investment losses and to payments made to a Saudi businessman.

In the interview, Ghosn reiterated his insistence that he is innocent and said others in the company schemed to force him out with a "plot and treason."

"People translated strong leadership to (mean) dictator, to distort reality," he told the Nikkei. It was for the "purpose of getting rid of me," he was quoted as saying.

Nissan Motor Co. defended itself, saying prosecutors took action following an internal investigation set off by whistleblowers in the company.

"The sole cause of this chain of events is the misconduct led by Ghosn and Kelly," company spokesman Nicholas Maxfield said. He was referring to Greg Kelly, another executive who has been charged with collaborating with Ghosn in underreporting his compensation. Kelly was released on bail last month and remains in Tokyo.

Authorities have rejected Ghosn's requests for bail, saying he might tamper with evidence or possibly flee.

Ghosn told the Nikkei he had no intention of fleeing and wants to defend himself in court. But he questioned why he could not gain release on bail.

"I don't understand why I am still being detained," he was quoted as saying, adding he could not tamper with evidence because "All the evidence is with Nissan."

The newspaper said Ghosn did not appear tired or flustered and when asked about his health, he said he was "doing fine."

"In life there are ups and downs," the newspaper quoted him as saying.

Renault SA owns 43 percent of Nissan. It sent Ghosn to Japan in 1999 to help lead the Japanese automaker's turnaround from near bankruptcy. Ghosn said he had discussed a "plan to integrate" Nissan with Renault and their smaller alliance partner Mitsubishi Motors Corp. with Nissan's CEO, Hiroto Saikawa, in September.

The plan was to bring Nissan, Renault and Mitsubishi Motors closer together and ensure they had "autonomy under one holding company," he told the newspaper.

Ghosn refuted various allegations against him, saying most of the alleged violations were approved by Nissan's legal department or other senior executives.

He also denied any wrongdoing in buying expensive homes in Brazil and Lebanon, saying he needed a safe place to work and meet with people. The homes were no secret and if they had been a problem, he should have been consulted, Ghosn said.