The shuttle at Utah's state Capitol is expected to travel at 15 mph, and a human host will ride along to answer questions and ensure safety. 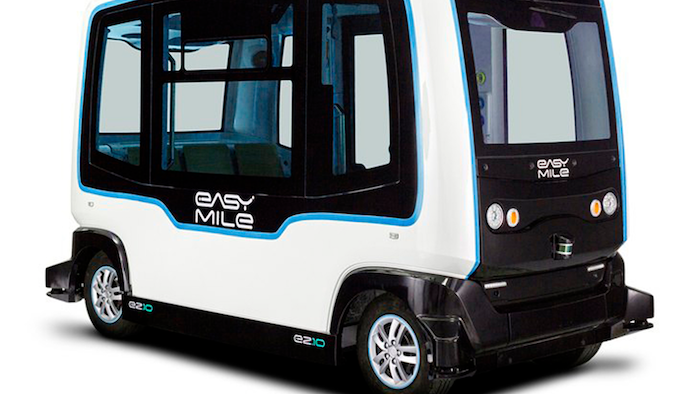 A driverless public shuttle is expected to make its Utah debut this year as state officials test the possibilities of autonomous vehicles.

The Salt Lake Tribune reports the shuttle that holds about a dozen people is expected to begin operating in February at the state Capitol.

A state lawmaker is hoping to change that. Republican Rep. Robert Spendlove is proposing a bill that would allow autonomous vehicles on state roads and resolve other legal problems.

Two public transportation agencies are spending a combined $600,000 to bring in a shuttle from French company EasyMile for the year to perform studies and demonstrations..

Transportation planners envision the small, slow-moving shuttles ferrying people to places such as transit stops, doctor's offices or stores. It could be especially useful for kids, disabled people or others without a driver's license.

They're hoping the hands-on demonstrations can show people what the autonomous vehicles can do safely now and what they could possibly do in the future.

While 70 percent of Americans believe autonomous vehicles will be a big part of the transportation landscape over the next 15 years, only 40 percent think those vehicles are safe, said Lisa Miller with the Utah Department of Transportation.

The agency is working with the Utah Transit Authority, which is testing the technology to see how it might be incorporated into its existing public transportation systems.

The shuttle is expected to travel at 15 mph, and a human host will ride along to answer questions and ensure safety. It's only capable of following a predetermined route and it's designed to detect obstacles or pedestrians.

"It's not a roller-coaster ride," said Jaron Robertson of the transit authority. "It's a slow-moving vehicle."

Officials are hoping that one day the shuttles could help reduce congestion and improve safety, since they're not capable of being distracted like a human driver. Fleets of autonomous cars could also communicate with each other and with traffic signals.

"Autonomous vehicles have the ability to make hundreds of millions of decisions pretty much simultaneously," Miller said. "I can't do that as an individual."