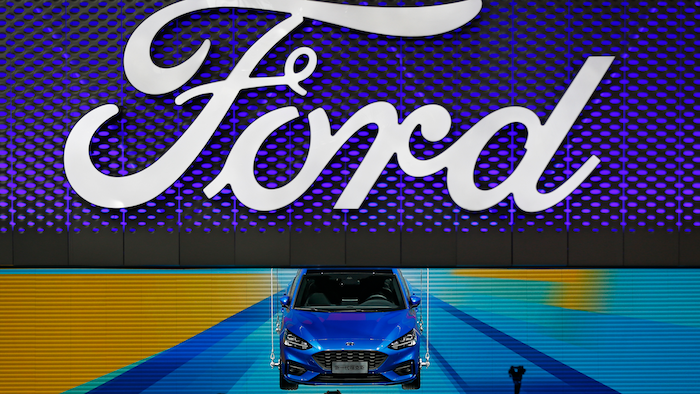 In this April 25, 2018, photo, visitors and journalists gather near a Ford Focus on display at the Ford exhibit during the media day for the China Auto Show in Beijing.
AP Photo/Andy Wong, File

Ford Motor Co.'s net profit fell 37 percent in the third quarter as sales slowed in the U.S. and China.

But the company still made $991 million from July through September, or 25 cents per share. Revenue was up 3 percent to $37.67 billion.

Chief Financial Officer Bob Shanks reaffirmed the company's full-year guidance of making an adjusted $1.30 to $1.50 per share, and he said tariffs cost the company about $1 billion.

Of the $1 billion, $600 million was due to commodity cost increases due largely to U.S. tariffs on imported steel and aluminum. Another $200 million came from retaliatory tariffs imposed by China on U.S. vehicles, with the balance from the cost of canceling plans to build a small vehicle in China, the Focus Active, that was to be exported to the U.S.

Ford also said it would not reach a previously announced goal of an 8 percent pretax profit margin by 2020 due to higher costs and deterioration of its European and China businesses.

Investors have been calling on Ford to detail $11 billion worth of cuts that were promised as the company tries to right-size itself to better compete globally. Ford says some employees will lose their jobs, largely white-collar workers.

Shanks and CEO Jim Hackett said they won't release further details until later. Under questioning from analysts, Shanks said the restructuring will take place gradually, mainly during the next five years.

At times there will be big moves, he said. "I know it's frustrating, but I hope that helps investors understand," he said. "We'll share everything we can with you when things are announced."

North America remained Ford's big profit center, where it made $2 billion before taxes, an increase of about $100 million. Shanks said that was due to selling more higher-profit SUVs and trucks and fewer low-margin cars as the market continued to shift away from sedans. So far this year, Ford's U.S. sales are down 2.4 percent.

Ford lost $152 million pretax in South America, $245 million in Europe and $208 million in its Asia Pacific region including China. It also lost $196 million on autonomous vehicles and mobility services, but made $47 million in the Middle East and Africa and $678 million from its credit arm.

Analysts have complained that Ford hasn't given many details of the restructuring plan, and its stock price has fallen because of that. Its shares have lost about one-third of their value this year.

Ford has released some details. On Wednesday, it announced changes in Asian operations by making its China business a stand-alone unit and recruiting the head of local automaker Chery Automobile to be its new China CEO.

For months, dealers have been complaining about an aging vehicle lineup, with some vehicles essentially staying the same since the 2011 model year.

But at a meeting with U.S. dealers on Oct. 17 in Las Vegas, company executives showed off new models.

Included were the Ranger small pickup, which Ford started to produce this week, as well as new versions of the Escape small SUV and Explorer large SUV that will reach showrooms next year. Also coming in 2019 is a new Mustang GT500, as well as the Super Duty version of the F-Series pickup, and a new Transit van.

In an interview Wednesday, North America President Kumar Galhotra conceded that Ford had let its products get too old, but pledged not to let it happen again.

"Right now our product portfolio isn't as fresh as it should be, but by 2020 it's going to be the freshest in the industry," Galhotra said.

Ford announced previously that it would get out of the declining market for sedans in the U.S. to focus on SUVs, many with hybrid or electric drive systems. The iconic Mustang sports car eventually will be Ford's only U.S. car.

Jonas wrote in a note to investors that the restructuring plan, while significant, "lacks visibility." He's concerned that "the capital markets do not have confidence in Ford to take decisive action fast enough."

Ford's earnings came the same day as Tesla Inc. delivered on CEO Elon Musk's promise to make money in the third quarter. The electric car and solar panel company earned $311.5 million, swinging from a loss of $619 million a year ago.