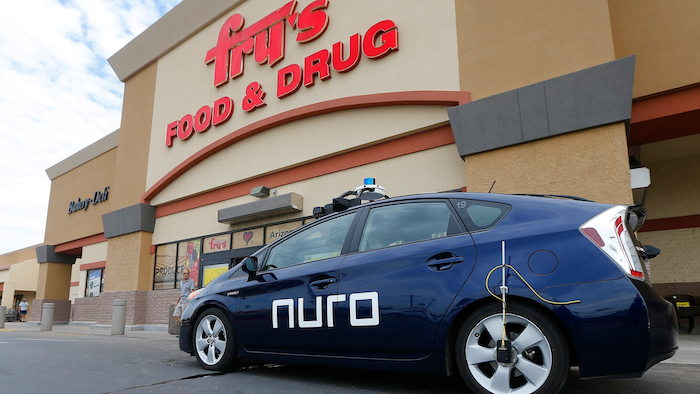 This Aug. 16, 2018, file photo shows a self-driving Nuro vehicle parked outside a Fry's supermarket, which is owned by Kroger, as part of a pilot program for grocery deliveries in Scottsdale, Ariz.
AP Photo/Ross D. Franklin, File

Arizona will be home to a new, sprawling facility solely dedicated to researching autonomous vehicles, signaling the state's full embrace of the growing technology.

Gov. Doug Ducey signed an executive order Thursday creating the newly minted Institute for Automated Mobility. The proposed hub will focus on the technology and its integration into the real world, he said in a statement.

Multiple state agencies, Arizona's three major public universities and tech giant Intel are partnering on the project. The facility will include a simulation lab to test various road scenarios. Academics from the universities will be expected to study and publish findings on safety-related issues. Dr. Sethuraman Panchanathan, Ducey's senior adviser for science and technology, described the hub as a "concierge-type service" for research and development projects.

"This truly takes a village approach. All disciplines have to come together," Panchanathan said.

Arizona is not the first state to have an epicenter devoted to autonomous cars. In April, Michigan opened a 500-acre (202-hectare) nonprofit center for autonomous vehicle research with Microsoft as a partner. The American Center for Mobility, outside of Ypsilanti, was designated by the U.S. Department of Transportation as one of 10 "proving grounds" for an automated vehicle pilot program. It includes a test track for autonomous cars.

The University of Michigan also has its own 32-acre (13 hectare) "Mcity" in Ann Arbor for experimentation with driverless cars.

A location for the Arizona facility was not disclosed but metropolitan Phoenix continues to be a frequent testing ground for driverless vehicles. The area, however, was also the site of the first fatality involving a self-driving vehicle.

A self-driving Uber SUV struck and killed a pedestrian in the Phoenix suburb of Tempe in March. Authorities determined the human backup driver was watching a program on her cellphone and looking down just before the crash. The incident wouldn't have happened had the driver not been distracted, according to the police report. Uber later ceased testing the cars in Arizona but has since relaunched efforts elsewhere.

The Arizona Commerce Authority will oversee the institute. President Sandra Watson said no state tax dollars are funding the project. The state so far has kicked in $1.5 million, which came from old small business loans that have since been repaid. Intel is investing an undisclosed amount.

The institute does hope to take the driver's seat in shaping legislation, Watson said.

"All the work that is conducted through the institute will inform future policies by the state of Arizona," she said.

Other companies experimenting in Arizona with similar technology include Waymo. The Google spinoff has been trying out robotic cars to help commuters get to stops on Phoenix's transit system. The company is also conducting a pilot program with Walmart shoppers taking the vehicles to pick up online grocery orders. Supermarket chain Kroger Co. recently partnered with Nuro, a Silicon Valley startup founded by ex-Google engineers, to test delivering groceries with driverless cars in the suburb of Scottsdale.