LEONARDO is designed to walk in harsh environments and, if the terrain starts to give way, activate its thrusters and fly above it.

Researchers from the Northeastern University College of Engineering are working on a robot that can walk and fly.

The hope is that the robots may one day be used to autonomously explore other planets. The robot is still under development, as you can see from the exhilarating footage of the robot’s standing tests.

The robot is call LEONARDO (LEg ON Aerial Robotic DrOne).

The work comes from Alireza Ramezani, a roboticist whose previous work includes the Bat Bot, a three-ounce flying prototype that mimicked the flight patterns of fruit bats. The Bat Bot was designed to be able to access and assess disaster sites.

Building off his previous work, LEONARDO will not only be able to fly over these harsh environments, but walk as well. The robot’s sensors scan the environment and if, for example, the terrain starts to give way, Leo can activate its thrusters, take off and fly above it.

The robot is about 2.5 feet tall, weighs six pounds and has a thin body made of carbon fiber.

With the design, the researchers wanted to address a big challenge for bipedal robots: falling. Their answer: A robot that never falls. 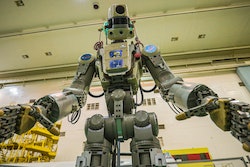