Airbus Could Move in Case of 'No-Deal' Brexit 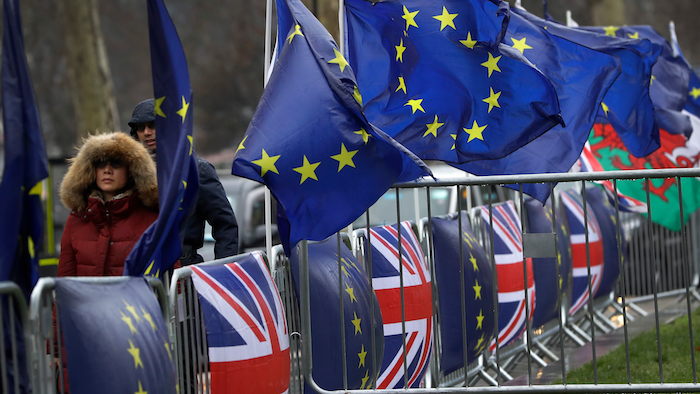 The chief executive of Airbus warned Thursday that the aviation giant could move its U.K. operations out of Britain if the country leaves the European Union without a deal on trade relations, in one of the starkest assessments yet of the economic impact of a "no-deal" Brexit.

Business leaders have expressed growing frustration at the lack of progress in securing a Brexit deal before Britain's scheduled March 29 exit from the bloc. Last week British lawmakers threw out the divorce deal Prime Minister Theresa May had struck with the EU, and attempts to find a replacement are gridlocked.

U.K. firms are bracing for disruption amid fears that a "no-deal" Brexit will cause economic chaos by eliminating trade agreements and imposing tariffs, customs checks and other barriers between the U.K. and the EU, its biggest trading partner.

"Aerospace is a long-term business and we could be forced to re-direct future investments in the event of a no-deal Brexit," Enders said. "And make no mistake there are plenty of countries out there who would love to build the wings for Airbus aircraft."

Airbus has more than 14,000 employees in Britain — with 110,000 more working in jobs supported by Airbus programs — as well as some 6 billion pounds ($7.83 billion) in annual turnover.

"Please don't listen to the Brexiteers' madness which asserts that, because we have huge plants here, we will not move and we will always be here," Enders said in a statement released by Airbus. "They are wrong."

Warnings from businesses have grown louder in recent days, but the Airbus comments are notable because of the tone — and the pointed reference about a willingness to pull up stakes and go.

The Bank of England has said that in a worst-case scenario, a sudden Brexit with no deal on future relations could trigger a recession, with Britain's economy shrinking 8 percent within months as unemployment and inflation soar.

The British government is split between ministers who think leaving without a deal would be manageable and those who believe it must be avoided at all costs.

U.K. Treasury chief Philip Hammond — who falls into the latter category — said that during Britain's 2016 EU membership referendum, voters had been promised "that they were voting for a more prosperous future" by choosing to leave the EU.

Addressing a meeting at the World Economic Forum in Davos, Switzerland, Hammond said that "leaving without a deal would undermine our future prosperity, and would ... represent a betrayal of the promises that were made."

Since her Brexit deal was rejected by Parliament last week, May has been holding talks with government and opposition politicians, business representatives and trade union leaders. But she has shown little appetite for radically altering her Brexit plan, or lifting her insistence that Brexit means leaving the EU's single market and customs union.

Instead, she hopes to win lawmakers' backing for her deal after securing changes from the EU to a contentious measure designed to ensure an open border between EU member Ireland and the U.K.'s Northern Ireland.

"A deal that doesn't give us a legally binding workable guarantee that there won't be a hard border between Northern Ireland and Ireland is a deal in name only," Irish Prime Minister Leo Varadkar said Thursday. "And that's not something that we could accept."

"The truth is nobody can know for sure what will happen in a no-deal scenario," Varadkar said in Davos. "That's why we've worked so hard over the past two years to put together a withdrawal agreement, a withdrawal agreement that gives everyone a transition period to adjust to any permanent changes that may take place."

Britain's divided Parliament is set to vote Tuesday on May's proposal — and on rival plans, including attempts by groups of legislators to delay Britain's exit and to rule out a "no-deal" Brexit.

May's government has rejected both ideas, but a growing number of lawmakers believe Britain will have to ask the EU to delay Brexit past March 29 to solve the Brexit impasse.

"It is a disgrace that more than two years after the result of the 2016 referendum, businesses are still unable to plan properly for the future," Enders said. "And we, along with many of our peers, have repeatedly called for clarity. But we still have no idea what is really going on here."