A lawsuit, filed by the widows of two Virginia state troopers, argues the helicopter should've been retired and didn't receive proper inspections. 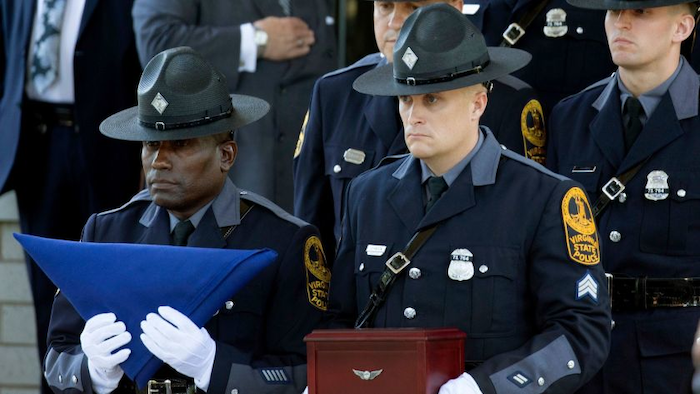 Virginia State Police carry a flag and remains of Trooper Berke Bates, who was killed in a helicopter crash during protests in Charlottesville, Va., at his funeral, Aug. 18, 2017.
Daniel Sangjib Min/Associated Press

CHARLOTTESVILLE, Va. (AP) — The company that manufactured a helicopter that crashed and killed two Virginia state troopers monitoring a white nationalist rally says it's not guilty of negligence and fraud.

The Daily Progress reports widows Amanda Bates and Karen Cullen filed a lawsuitin June that accuses various companies responsible for manufacturing and maintaining the helicopter of wrongdoing in their husbands' deaths. They allege the helicopter that crashed the day of the 2017 Charlottesville rally should've been retired and didn't receive proper inspections.

Bell Helicopter Textron and Rolls-Royce deny responsibility and say the claims are insufficient. Dallas Airmotive filed a motion to dismiss.