The module will attempt India's first moon landing on a relatively flat surface on Saturday. 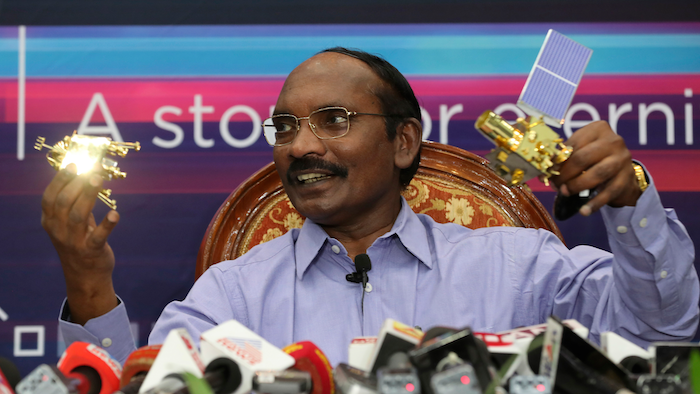 In this Aug. 20, 2019, file photo, Indian Space Research Organization Chairman Kailasavadivoo Sivan displays a model of Chandrayaan 2 orbiter and rover during a press conference at their headquarters in Bangalore.
AP Photo/Aijaz Rahi, File

NEW DELHI (AP) — The landing module of India's unmanned moon mission separated from the orbiter on Monday ahead of its planned touchdown on the moon's south polar region this weekend, the space agency said.

All the systems of the orbiter and the lander are "healthy," the Indian Space Research Organization said in a statement.

Monday's maneuver removed the lander from the orbiter's top, where it had been sitting since the mission took off from southern India on July 22. The module has reached a distance of about 100 kilometers (62 miles) from the moon's surface, the space agency said.

It will attempt India's first moon landing on a relatively flat surface on Saturday to study previously discovered water deposits. The roughly $140 million mission is known as Chandrayaan-2, the Sanskrit word for "moon craft."

Space agency chairman Dr. K. Sivan has said that landing on the lunar surface involves a lot of technical complexities — an event he described as "15 terrifying minutes."

If India did manage the landing, it would be only the fourth country to do so after the U.S., Russia and China.

India plans to send humans into space by 2022.