The images show a black plume of smoke and the charred remains of a rocket. 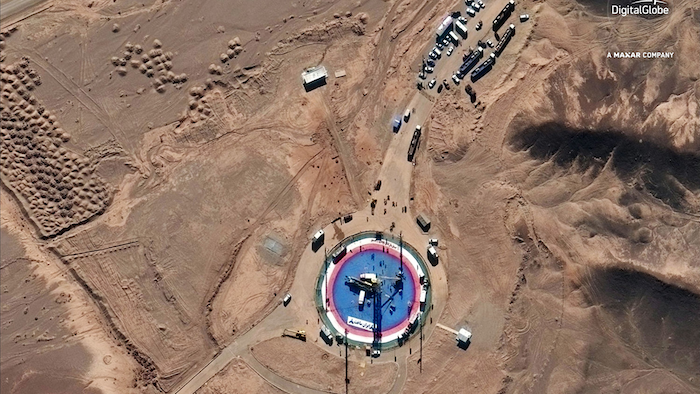 Satellite image provided by DigitalGlobe shows a missile on a launch pad at the Imam Khomeini Space Center, Feb. 5, 2019.
DigitalGlobe, a Maxar company via AP

DUBAI, United Arab Emirates (AP) — Satellite images appear to show the smoldering remains of a rocket at an Iranian space center that was to conduct a U.S.-criticized satellite launch.

The photos show black smoke and part of a painted launch pad apparently scorched away.

David Schmerler, a senior research associate at the Middlebury Institute of International Studies, told The Associated Press: "Whatever happened there, it blew up and you're looking at the smoldering remains of what used to be there."

Iran was to launch the Nahid-1 satellite in the coming days. There had been activity at the space center in recent days.

There was no immediate reaction from Iran.