Gary George bought a box of reel-to-reel tapes, which included footage of the moon mission, at a government surplus sale in the 1970s for about $218. 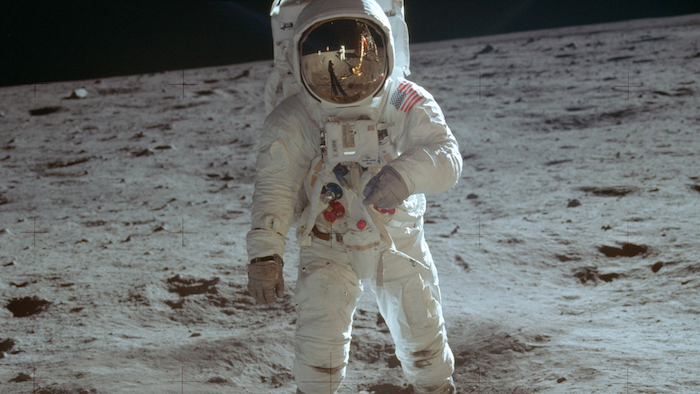 In this July 20, 1969 photo made available by NASA, astronaut Buzz Aldrin, lunar module pilot, walks on the surface of the moon during the Apollo 11 extravehicular activity.
Neil Armstrong/NASA via AP

LAS VEGAS (AP) — Film footage of the original mission to the moon has been auctioned for over $1.8 million, a report said.

Gary George earned 8,000 times the price he paid for the three film reels of the Apollo 11 mission, The Las Vegas Review-Journal reported Sunday.

Auction house Sotheby's handled the sale Saturday to a private bidder on behalf of the Las Vegas engineer and former NASA intern.

George bought a box of 2-inch (5-centimeter) reel-to-reel tapes in the 1970s at a government surplus sale for about $218, Sotheby's said.

He planned to sell the box to television stations for recording stock until his father noticed three tapes labeled "Apollo 11 EVA" and dated July 20, 1969, Sotheby's said.

George discovered the content of the tapes when NASA announced in 2008 it was seeking missing recordings for the moonwalk's 40th anniversary. NASA officials explained they were searching for the original 14-track tapes made from data relayed to ground stations in California and Australia, which were likely erased and reused.

"There was no video that came down slow scan that was not converted live, fed live, to Houston and fed live to the world," NASA engineer Dick Nafzger said at a news conference in 2009. "So, just in case anyone thinks there is video out there that hasn't been seen, that is not the case."

The video that Nafzger and his team discovered was fed directly from NASA mission control in Houston, Texas, to CBS Corp. and stored in archives, officials said.

George retained the tapes for another 10 years while waiting for the moon landing's 50th anniversary Saturday, Sotheby's said.

The tapes do not have any unseen footage and were likely recorded from video converted to a broadcast television format, NASA said.

George did not respond to requests for comment by the Review-Journal.