Turbulence Can Strike Even in Clear Conditions, Science Says

Weather forecasters can't be much help in warning pilots about where they'll encounter "clear-air turbulence." 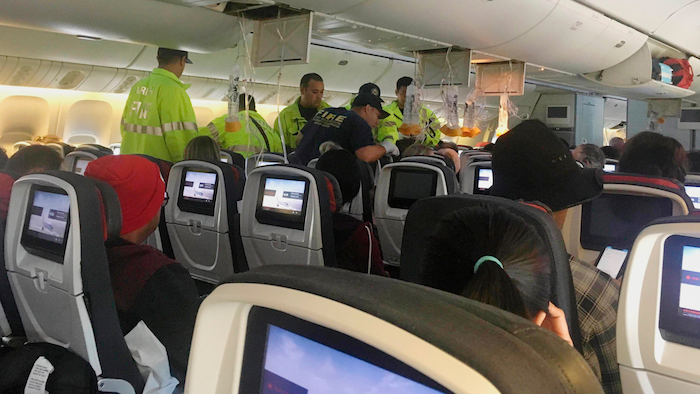 In this Thursday, July 11, 2019, photo, provided by Tim Tricky of the band Hurricane Fall, emergency workers treat a passenger on an Air Canada flight to Australia that was diverted and landed at Daniel K. Inouye International Airport in Honolulu.
Tim Tricky/Hurricane Fall via AP

"Clear-air turbulence," which evidently jolted an Air Canada flight Thursday over the Pacific Ocean, strikes almost literally out of the blue, with no visible warning in the sky ahead. An aircraft's radar can't spot it coming either.

But passengers can certainly feel it. Some on the Air Canada flight were slammed against the ceiling, and more than two dozen were taken to hospitals after it made an emergency landing in Honolulu.

Clear-air turbulence happens most often in or near the high-altitude rivers of air called jet streams. The culprit is wind shear, which is when two huge air masses close to each other are moving at different speeds. If the difference in speed is big enough, the atmosphere can't handle the strain, and it breaks into turbulent patterns like eddies in water.

Another source of turbulence is masses of air that bob up and down in the atmosphere, somewhat like waves in the ocean. They can arise spontaneously or form as air flowing over mountains is forced upward, starting the up-and-down cycle.

Weather forecasters can't be much help in warning pilots about where they'll encounter clear-air turbulence, says Thomas Guinn, a meteorology professor at the Embry-Riddle Aeronautical University in Daytona Beach, Florida.

"It's probably one of the most challenging forecast problems we have right now for aviation meteorology," he said.

Paul Williams of the University of Reading in England, who is working on forecasting clear-air turbulence, said some tests suggest that specialized radar-like devices could make the atmospheric disruptions visible to pilots. But the devices are expensive and very heavy, a drawback for airplanes, so they are not widely used.

Once pilots hit a patch of turbulence, they can try to fly out of it, possibly by changing altitude, said Clint Balog, also of Embry-Riddle.

According to the U.S. Federal Aviation Administration, turbulence of all kinds injures about 40 passengers and crew a year on average.

Williams said that because of how climate change affects high-altitude conditions, "we expect more clear-air turbulence in the future."