The trend is most prominent in Sweden, where climate activism has challenged travelers to confront the huge carbon cost of flying. 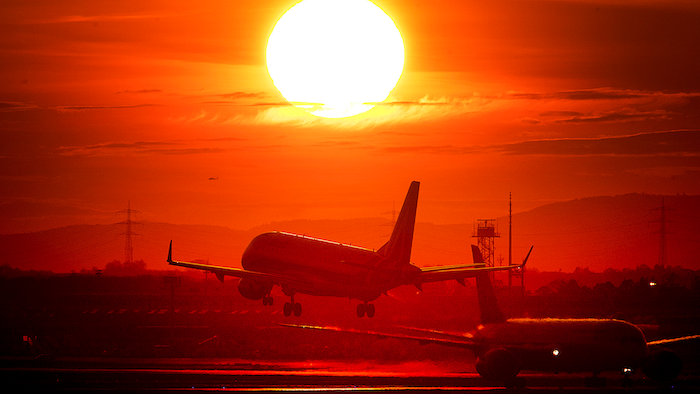 In this Wednesday, March 20, 2019, file photo, an aircraft lands at the international airport in Frankfurt.
AP Photo/Michael Probst, File

School's out for summer and Swedish lawyer Pia Bjorstrand, her husband and their two sons are shouldering backpacks, ready to board the first of many trains on a whistle-stop vacation around northern Europe.

The family is part of a small but growing movement in Europe and North America that's shunning air travel because it produces high levels of greenhouse gas emissions. While experts say fighting climate change will require bigger and bolder actions by governments around the world, some people are doing what they can to help, including changing long-held travel habits.

The trend is most prominent in Sweden, where the likes of teen climate activist Greta Thunberg have challenged travelers to confront the huge carbon cost of flying.

"Even I, who was climate aware 10 years ago, didn't think about flying in the way that I think now," said Bjorstrand as she waits on the platform of Nykoping station in eastern Sweden. "I didn't know that the effect of flying was so big. So we flew everywhere."

Airlines argue that flying accounts for just 2% of man-made greenhouse gas emissions and increasingly efficient planes now use about the same amount of fuel per passenger as a half-full car. Yet the ease and falling cost of air travel is enabling more people to fly more often, meaning airline emissions are soaring even as other sources decline.

In 2013, commercial carriers emitted 710 million tons of carbon dioxide. This year, industry group IATA predicts airlines' emissions of CO2 will reach 927 million tons, more than an industrial country like Germany. The figures don't include other factors that scientists say increase the greenhouse effect from flying.

Bjorstrand's train journey from Nykoping to the Danish capital Copenhagen weighs in at 2.4 kilograms (5.3 pounds) of CO2 per person, according to an online calculator created by the Germany-based Institute for Energy and Environmental Studies consultancy. That compares with over 118 kilograms (260 pounds) of CO2 for a one-way flight.

Such amounts quickly take a big chunk out of the annual carbon budget of 2,000 kilograms per person that scientists say would be sustainable.

The rail journey is almost twice as long by train — 5 ½ hours compared with three hours of flying and transit — but that's fine with the family. There'll be plenty of time for Oscar, 9, to pore over his comic books and Gabriel, 11, to read up on World War II history or just watch the lush green forests and lakes of southern Sweden glide by.

Last year, Sweden's forests literally went up in smoke as the country experienced a heat wave that led to wildfires unprecedented in its modern history, driving home the possible consequences of global warming for this rich Nordic nation.

It was around that time that Thunberg, then a 15-year-old student in Stockholm, began staging weekly protests outside parliament that inspired similar demonstrations by teens and young adults elsewhere. Thunberg has become a celebrity among environmentalists for her heartfelt speeches, savvy use of social media and willingness to take long train journeys to attend events in Rome, Vienna or London.

In Sweden, this stance against air travel has spawned the term "flygskam," or "flight shame."

"I can see guilt growing," said Bjorstrand. "Some colleagues try not to talk to me about their long-haul flights."

The main Swedish train operator, SJ, says it sold 1.5 million more tickets in 2018 than the previous year. Even the number of business travelers is up, rising 12% in the first three months of this year, the company said.

Pushback against flight-shaming is coming from some unlikely sources.

Anders Levermann, a scientist at the Potsdam Institute for Climate Impact Research, believes that the world needs to stop adding carbon to the atmosphere by mid-century if it wants to keep average temperature increases below 2 degrees Celsius (3.6 Fahrenheit) as outlined in the 2015 Paris accord.

But an abrupt end to air travel could have disastrous consequences for society, Levermann warns.

"I think travelling in general brings people together," he said. "That includes aviation."

Levermann argues that the climate movement shouldn't focus only on air travel.

"At the moment it is treated like whales for biodiversity," he said. "It's a poster child."

A more effective way to reduce carbon emissions would be to pressure political leaders into taking decisions that have a nationwide or global effect, rather than guilt-tripping individuals into minimizing their carbon footprint, said Levermann.

There is some hope that governments will act. Environmental parties were one of the big winners of last month's European Union Parliament elections. Leaders of the 28-nation bloc will this week debate a long-term strategy on climate change, while lower-ranking officials meet in The Hague to discuss taxing aviation fuel and airline tickets.

Some pin their hopes on technological advances in aviation, including electric planes, though viable battery-powered models aren't on the horizon yet.

In the meantime, airlines are trying to address customer concerns even as they prepare to fight new emissions taxes.

"It's obviously a hot topic and something we're seeing particularly in the European market," said Steffen Milchsack, spokesman for Lufthansa. The German airlines group wants to start using synthetic kerosene produced with renewable energy in coming years and recently began paying a small fee to compensate the carbon emissions caused by staff travel.

Such small, voluntary payments — known as offsets — are preferred by airlines over government-imposed taxes or carbon caps.

So far, a majority of passengers are still unwilling to pay more for flights or fly less. A survey by the German travel agents' association, DRV, found that only 2% of air travel last year was offset.

But Julia Zhu, a spokeswoman for Atmosfair, a German nonprofit organization, says the amount of CO2 offsets it processed rose from 550,000 tons in 2017 to 800,000 tons last year.

Atmosfair uses money from offsets — typically a few euros (dollars) per person for a short-haul flight — to support small-scale carbon reduction efforts, such as buying efficient cooking stoves for families in Africa and Asia.

Pia Bjorstrand, however, isn't prepared to give up flying altogether just yet. Last winter, like many sun-starved Scandinavians, the family took a long-distance flight. They bought carbon credits to offset the trip to Namibia.

"The U.S. or Africa or Southeast Asia, it's hard to go by train," she said.