The aerospace giant failed to win any orders for its grounded 737 Max airliner in March after a second deadly crash in less than five months. 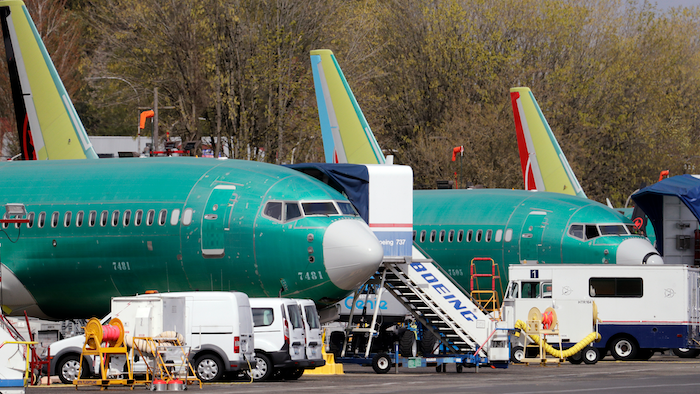 Boeing failed to win any orders for its 737 Max airliner in March as scrutiny of the plane increased following a second deadly crash in less than five months.

Deliveries of finished Max jets also tumbled, to 11 from 26 in February. That was not surprising — Boeing suspended deliveries in mid-March after regulators around the world ordered the plane grounded.

Boeing's report Tuesday on orders and deliveries came just three days after the company announced that it will cut production of 737s from 52 a month to 42. Meanwhile, airlines that own the nearly 400 grounded Max jets are canceling flights.

The damage to Boeing could be temporary, however, if the company can complete a fix to key software on the Max and reassure regulators and passengers that it is a safe plane.

Many analysts believe the deliveries will only be delayed, not lost forever, unless airlines cancel orders for the plane.

The figures on March orders and deliveries are "secondary to getting the Max fix approved and its grounding lifted," Cowen aircraft analyst Cai von Rumohr said.

The plane was grounded when an Ethiopian Airlines Max crashed March 10, less than five months after a Lion Air Max plunged into the sea off the coast of Indonesia. In all, 346 people died.

Boeing has acknowledged that in each crash, a faulty sensor triggered an anti-stall system when it wasn't needed, pushing the plane's nose down. Pilots on each flight fought unsuccessfully to regain control, according to flight data retrieved from the planes.

The company is still working on the software update, which was delayed recently by several weeks because of the discovery of a second software problem. Boeing hasn't described the second issue but says it is not related to the anti-stall system.

So far, most of Wall Street and Boeing's airline customers have publicly stood behind the company during its crisis. Boeing hasn't disclosed any lost orders, although Garuda Indonesia has said it will cancel an order for 49 Max jets. Boeing has a backlog of about 4,600 orders for the plane.

Delta Air Lines neither owns nor has any orders for the Max — most of its pending orders are with Boeing's rival, Airbus. But Delta CEO Ed Bastian said he remains confident in Boeing's technological prowess and is interested if Boeing decides to build a new plane bigger than the 737.

"I am confident that Boeing will solve this issue" with the Max, he said. "I expect that to be a hiccup."

Airlines that own the Max, however, are paying a price. On Tuesday, American Airlines cut a key revenue estimate after canceling 1,200 flights in the first quarter due to the grounding of its 24 Max jets.

American, the world's biggest airline, said that it can't predict the future financial fallout until it knows how long the jets will be parked and the circumstances under which they will be allowed to fly again.

Over the weekend, American removed the plane from its schedule for an additional six weeks, through June 5.