Senate Commerce Committee Chairman Roger Wicker wrote that whistleblowers had told senators the inspectors didn't have all the training required by the agency. 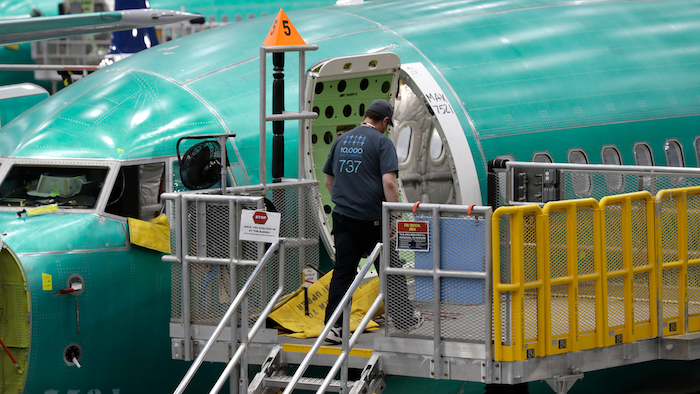 In this March 27, 2019, file photo a Boeing 737 MAX 8 airplane is shown on the assembly line during a brief media tour of Boeing's 737 assembly facility in Renton, Wash.
AP Photo/Ted S. Warren, File

The acting head of the Federal Aviation Administration is telling a senator that safety inspectors who certified the Boeing 737 Max jet are properly trained.

In a letter to the chairman of the Senate Commerce Committee, Daniel Elwell says members of the Flight Standardization Board that evaluated the Max are fully qualified for their jobs.

Committee Chairman Roger Wicker wrote in a letter to Elwell that whistleblowers had told senators the inspectors didn't have all the training required by the agency.

The FAA's certification of the Max is under scrutiny after two crashes in Indonesia and Ethiopia that killed a total of 346 people. Investigators are looking at anti-stall software that can automatically point the planes' nose down as a possible cause.

Critics say the FAA's practice of allowing Boeing employees to do inspections on behalf of the agency creates a cozy relationship that raises conflicts of interest. FAA officials review the inspections that are done by company employees.

Elwell's response, released Friday, said the agency received a complaint from one of its inspectors last November alleging that some inspectors didn't have required training. But an investigation found that the inspector was referring to a different group of inspectors in the Aircraft Evaluation Group.

The inspector's concerns about that group were substantiated by the investigation and "will be remedied as soon as possible," Elwell wrote. A manager who retaliated against the inspector who reported the problems no longer works at the agency, the letter said.

The FAA will have a full response to Wicker's letter, but Elwell wrote that he wanted to provide an initial response about the Max inspectors.