The company missed its first attempted ground landing after the first-stage rocket booster spun out of control and crashed offshore. 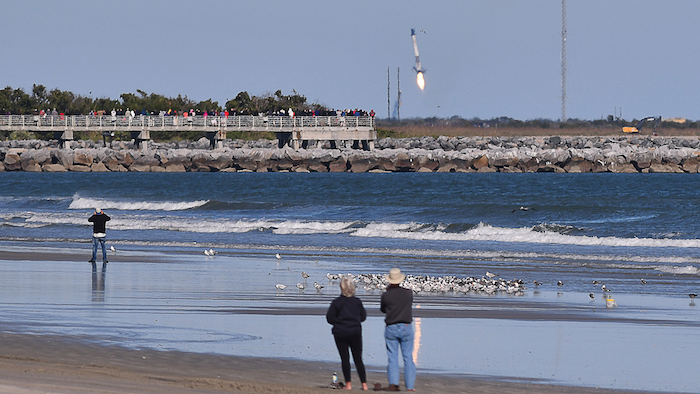 The first stage booster from a Falcon 9 rocket experiences a control problem during its descent.
Malcolm Denemark/Florida Today via AP

Christmas turkey rocketed toward the International Space Station on Wednesday, along with cranberry sauce, candied yams and the obligatory fruitcake.

The SpaceX booster missed its landing zone on the ground after liftoff, however, and ended up in the sea just a couple of miles offshore.

Groans filled SpaceX Mission Control in Hawthorne, California, as live video showed the first-stage rocket booster spinning out of control, still high above Cape Canaveral. It was the company's first missed ground landing, although it has overshot floating barges plenty of times in the past, a tougher feat to pull off.

A SpaceX commentator called it a "bummer," but noted it was secondary to the Falcon 9 rocket's main mission of getting the Dragon capsule to orbit.

SpaceX chief Elon Musk said the booster appeared to be undamaged. The hydraulic pump for the landing fins apparently stalled, but the engines stabilized the approximately 160-foot-tall booster just in time, allowing for "an intact landing in water!" Musk noted via Twitter. "Ships en route to rescue Falcon," he tweeted.

SpaceX's 12 previous ground landings — dating back to 2015 — all were successful. Altogether, the company has recovered 32 boosters following liftoff — 33 once this one is towed back, said Hans Koenigsmann, a SpaceX vice president. He did not know if it could be reused.

Koenigsmann said the booster deliberately avoided land after sensing a problem, a built-in safety feature, and even managed to touch down upright in the Atlantic, atop its landing legs.

The disappointment was offset by the successful flight of the Dragon capsule and its 5,600 pounds (2,500 kilograms) of cargo. It should reach the space station Saturday.

"What a great day for a launch," said Kennedy Space Center director Bob Cabana. Twenty years ago this week, Cabana commanded the shuttle mission that carried up the first U.S. part of the space station .

Besides smoked turkey breast and all the other fixings for Christmas dinner, the delivery includes 40 mice and 36,000 worms for aging and muscle studies.

Researchers expect a tenfold increase in the worm population. There will be plenty of room on board for all the tiny nematodes. It turns out their muscles are similar to ours in structure and function, making them perfect lab substitutes, said lead scientist Timothy Etheridge of the University of Exeter in England.

The launch was delayed a day when NASA discovered that the food for the mouse-tronauts was moldy. More food had to be rushed in from California.

Just two days earlier, three astronauts arrived at the space station to join the three already there. The crew includes two Americans, two Russians, one German and one Canadian. The newest residents will remain on board for six months, while the others will return to Earth on Dec. 20.

SpaceX has been making station deliveries for NASA since 2012. The private company expects to start launching station crews next year.