How the "queen of the skies" reigned over air travel. 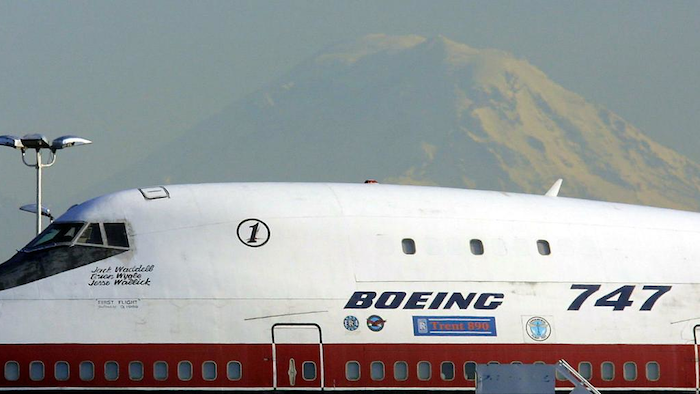 The first 747 ever built sits on the west side of Boeing Field near Boeing's corporate headquarters, Wednesday, March 21, 2001, in Seattle.
Alan Berner/Associated Press

On Sept. 30, 1968, the first Boeing 747 rolled out of its custom-built assembly plant in Everett, Washington. From the beginning, everything about the plane once known as the “queen of the skies” was big.

It was the first wide-body “jumbo jet” ever built, involvingabout 50,000 construction workers, mechanics, engineers and others who took it from an idea to the air in just 16 months in the late 1960s. Until 2007 and the introductionof the Airbus A380, it was the largest civilian airplane in the world.

Versions of the 747 have been used in a variety of famous ways. In 1990, for example, a pair of 747-200s began operating as Air Force One, the plane that ferries around the U.S. president.

Just to produce the 747, Boeing first had to erect what was and still is the largest building by volume ever constructed – big enough to hold 75 football fields or all of Disneyland.

I’ve been researching and teaching the history of American aviation for more than a quarter-century. Even though all U.S. airlines have retired their 747s, marking the end of an era, I believe it’s worth remembering the amazing story of the airplane that helped make international air travel affordable.

The jumbo jet is born

The story of the 747, like those of many other aircraft, began with a military request.

Although Boeing lost its bid for what is now known as the C5 Galaxy, the designs and studies that went into its proposal didn’t go to waste. That’s because around the same time, Juan Trippe, the hard-charging president of Pan American World Airways, wanted Boeing to build an airliner twice the size of the first-generation jet airliner, the 707.

It would be “a great weapon for peace, competing with intercontinental ballistic missiles for mankind’s destiny,” he insisted.

But at the time, it was a very risky endeavor.

Many in the aviation industry – including at Boeing – believed that the future of air travel belonged to the fast, not the large. They envisioned new fleets of supersonic aircraft – such as the Concorde, which began flying in 1976 – that would make the existing subsonic flight obsolete, especially on the long routes the 747 was designed to fly. For comparison, the Concorde could make the trip from London to New York in about three hours, while a flight on a 747 (or any other subsonic commercial airliner) could take eight to 10 hours.

But Boeing plowed ahead with the project anyway. The new plane had its first test flight on Feb. 9, 1969, and debuted to a world audience at the Paris Air Show later that summer. By the end of the year, the Federal Aviation Administration declared it airworthy, and Pan Am took delivery of its first 747 on Jan. 15, 1970.

Although the 747-100 at full capacity promised the airlines cost efficiency, the plane rarely flew that way, with 400 passengers. In part, this was because the 747 had the misfortune of launching during a recession and the first oil crisis, both of which resulted in fewer passengers.

In addition, the project’s size itself almost threatened the aerospace company – and its banks – with bankruptcy because the aircraft’s development required Boeing to take on US$2 billion in debt, or about $20 billion in today’s dollars.

Fortunately for Boeing, it hedged its bets by designing the aircraft to function both as a passenger airliner and as an air freighter. It was the freighter variant that required the “hump” at the top of the fuselage to hold the cockpit so that the nose section could swing open.

The golden age of flight

The 747 was – and is – probably the most easily recognizable jet airliner. While most people would have a hard time distinguishing between a Boeing 707 and a DC-8 – or pretty much any other pair of jet airliners – the 747’s large size and distinctive “hump” at the front make it unmistakable.

It debuted at the end of the so-called golden age of flight, a time when air travel still was seen as glamorous and most airlines catered to an elite clientele. As such, early operators used the upper deck as a passenger lounge for first-class passengers, rather than filling the plane to its full capacity.

In the late 1970s, in an effort to entice more passengers, American Airlines went one step further, turning the lounge into a “piano bar” complete with a Wurlitzer organ and entertainer who led singalongs with the passengers.

Deregulation, however, soon made such glamorous amenities obsolete as airlines focused on cutting costs rather than offering high services. And over time, smaller and more efficient long-range twin-engine aircraft like the 777 and 787 diminished the need for a hulking jumbo jet.

Despite its problems, the 747 won a coveted place in American popular culture.

It “starred” in two disaster movies – “Airport 1975” and “Airport ‘77,” not to mention several films that involved hijackings, including “Air Force One.”

The 747 also gained further fame from certain specialty missions. NASA, for example, used a specially modified 747to transport the space shuttle between landing and launch sites.

And, of course, a 747 continues to fly around the “leader of the free world” and his entourage. In 2024, the 747-8 – possibly painted red, white and blue at President Donald Trump’s request – will take over the job, with a longer range, slightly higher speed and a higher maximum takeoff weight.

But Boeing has no plans to assemble another for the airlines. U.S. airlines stopped flying 747s in 2017, and what looks to be the last passenger 747-8 went to Korean Airlines that same year.

The aircraft, however, may still have a long life as a carrier of freight – UPS, for example, recently ordered 14 of them – as well as the American president, which means these icons of aviation will still fly well into the 21st century.

This article is republished from The Conversation under a Creative Commons license. Read the original article here: http://theconversation.com/50-years-of-the-boeing-747-how-the-queen-of-the-skies-reigned-over-air-travel-99814.