The space capsule that will transport India's astronauts was tested a few days earlier. 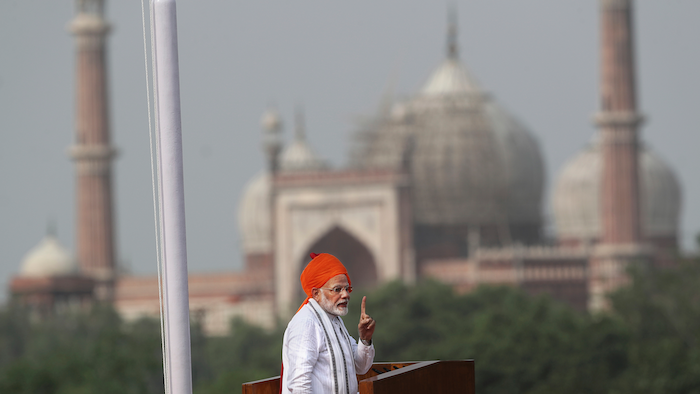 He said India will become the fourth country after Russia, the United States and China to achieve the feat and its astronaut could be a man or a woman. The space capsule that will transport India's astronauts was tested a few days earlier.

Rakesh Sharma was the first Indian to travel in space, aboard a Soviet rocket in 1984. As part of its own space program, active since the 1960s, India has launched scores of satellites for itself and other countries and successfully put one in orbit around Mars in 2014.

It hopes to showcase its technological ability to explore the solar system while also using research from space and elsewhere to solve problems at home. The $1 billion-a-year space program has already helped develop satellite, communication and remote-sensing technologies and has been used to gauge underground water levels and predict weather in the country prone to cycles of drought and flood.

Modi listed his government's achievements in the past four years in reforming the country's economy, reducing poverty and corruption. He announced a health insurance scheme for 500 million poor people providing a cover of 500,000 rupees ($7,150) per family a year.

He said India will become a growth engine for the world economy as the "sleeping elephant" has started to run on the back of structural economic reforms.

He said its economy was seen as fragile before 2014 but was now attracting investment. India is the sixth-largest economy in the world and Modi said international institutions see India as giving strength to the world economy for the next three decades.

He said the structural reforms like a national tax replacing various state and local taxes, bankruptcy and insolvency laws, and a crackdown on corruption have helped transform the economy.

Modi became prime minister when his Hindu nationalist Bharatiya Janata Party won a resounding victory in the national elections in 2014. He will seek another 5-year term for his party at elections due by March-April next year.