A Taiwanese team added familiar sounds despite the absence of fans. 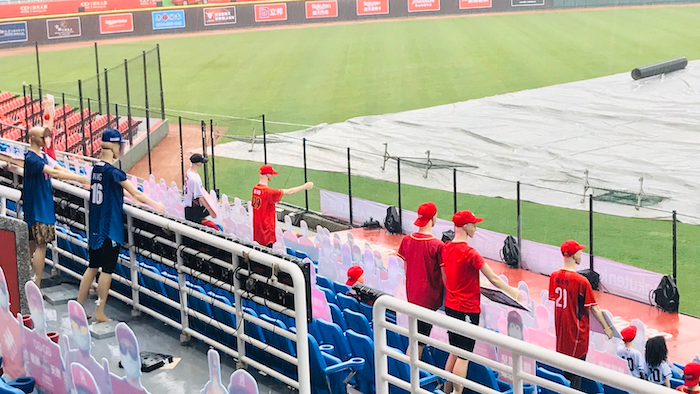 Taiwan is slowly reopening its economy after handling the coronavirus pandemic arguably better than any other country on Earth.

But authorities, still wary of the potential for new cases, instituted bans on public gatherings of 500 people or more, which meant that the country’s baseball league would hold a delayed opening day in mostly empty stadiums. One team took a novel approach — featuring both high-tech gadgets and considerably more low-tech alternatives — to help bring a more festive atmosphere to the proceedings.

The Rakuten Monkeys, based in Taoyuan and owned by the Japanese e-commerce giant, littered the empty stands with mannequins and cardboard cutouts dressed in team gear. Footage posted by the South China Morning Post, meanwhile, showed a line of robotic drummers, illuminated by colored lighting, bashing out rhythms at Taoyuan International Baseball Stadium.

“Given the circumstances, with the whole world dealing with the pandemic, the fact that we can still play ball here is quite exceptional,” Chiu Chang-jung, manager of the visiting Chinatrust Brothers, told the publication.

Opening day, however, was not able to fend off every natural enemy — the Monkeys’ first two games of the year were rained out, the Taiwan Times reports.