Governors cautioned that things will look much different. 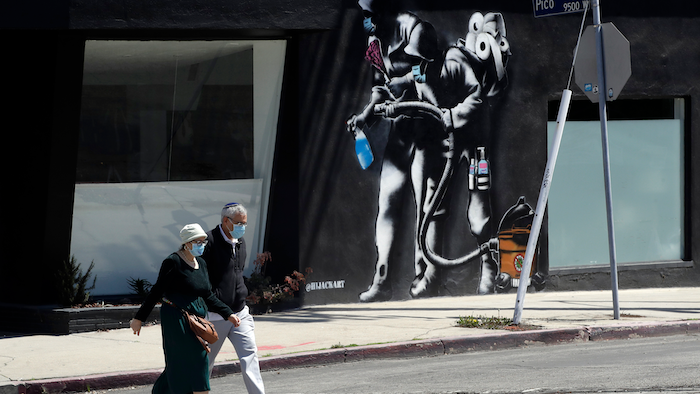 WASHINGTON (AP) — Setting the stage for a possible power struggle with President Donald Trump, governors around the U.S. began sketching out plans Tuesday to reopen their economies in a slow and methodical process so as to prevent the coronavirus from rebounding with tragic consequences.

In Italy, Spain and other places around Europe where infections and deaths have begun stabilizing, the process is already underway, with certain businesses and industries allowed to start back up in a calibrated effort by politicians to balance public health against their countries' economic well-being.

Trump announced a halt to U.S. payments to the World Health Organization pending a review of its warnings about the coronavirus and China. Trump, whose own response to the virus has been called into question, criticized the WHO for not sounding the alarm sooner. He asserted that the virus could have been contained at its source and lives could have been spared had the U.N. health agency done a better job investigating reports coming out of China.

While the crisis is far from over in the U.S., with more than 25,000 dead and approximately 600,000 confirmed infections by Johns Hopkins University's count, the doomsday scenarios that were predicted just two weeks ago have not come to pass, raising hopes from coast to coast.

California Gov. Gavin Newsom, who has joined a coalition with his counterparts in Oregon and Washington on how to emerge from the crisis, outlined a set of conditions for lifting restrictions in America's most populous state. Among other things, he said hospitalizations will have to decline and more testing will have to become available.

And when the state does reopen, he warned, things will not look the same. Waiters will probably be wearing masks and gloves, schools may stagger students' arrival times to reduce crowding, and large gatherings such as sporting events and concerts are "not in the cards,” the Democrat said.

“The house is still on fire,” New Jersey Gov. Phil Murphy said. “We still have to put the fire out" but also ”make sure this doesn’t reignite.”

Politicians and public health authorities alike warned that easing restrictions in the U.S. and Europe will have to be accompanied by widespread antibody testing to see who might be immune and ramped-up tracing of infected people’s contacts with others. That could well entail the use of smartphone technology.

Trump has repeatedly expressed his desire to see the U.S. reopened for business quickly, and at one point wanted to see churches packed on Easter. On Tuesday he said he would soon speak with all 50 governors and provide guidance on how and when to reopen. The previous day he insisted he has “total” authority over the loosening of restrictions, even though the Constitution largely delegates such powers to the states.

Gov. Andrew Cuomo of New York, by far America's hardest-hit state, ridiculed that assertion, saying: “We don't have a king in this country.”

While the president has issued national social-distancing guidelines advising people to stay home, it has been governors and local leaders who have instituted the tough, mandatory restrictions, such as lockdowns and the closing of schools and nonessential businesses.

The effects of such measures around the globe were made plain by the International Monetary Fund, which projected that the world economy will suffer its worst year since the Great Depression in the 1930s, shrinking by an estimated 3%.

Still, there were glimmers of hope, even in New York, where the death toll topped 10,800. Cuomo reported 778 deaths over the previous 24 hours but said fatalities were leveling off, and hospitalizations and the number of new patients put on ventilators were continuing to drop, showing that social distancing is working.

At the same time, he warned against complacency: “We could lose all the progress we made in one week if we do it wrong."

Governors across the country echoed that sentiment. Michigan's Gretchen Whitmer said, “We’ve got to make sure that we avoid a second wave at all costs.”

“We’re going to make decisions based on science and having a real strategic phase-in of our economy when it’s appropriate and safe to do so," the Democrat said.

Adding a dose of caution from the White House, Dr. Anthony Fauci, the government’s top infectious-disease expert, said in an interview with The Associated Press that the U.S. does not yet have the testing and tracing procedures needed to begin reopening the economy.

“We have to have something in place that is efficient and that we can rely on, and we’re not there yet,” Fauci said.

Any relaxation of social-distancing would have to occur on a “rolling” basis, not all at once, he said, reflecting the ways COVID-19 struck different areas at different times.

Fauci also said a vaccine might be possible by mid- to late winter, a slightly more optimistic outlook than his previous estimate of 12 to 18 months. “Please, let me say this caveat: That is assuming that it’s effective. See, that’s the big ‘if,’” he said. "It’s got to be effective and it’s got to be safe.”

Dr. Anne Schuchat who oversees coronoavirus response at the U.S. Centers for Disease Control and Prevention, said it has been working with federal officials to develop a detailed reopening plan, including determining what measures will need to be tracked and what conditions must be met. The plans, which remain under review, include separate steps for schools, businesses and other entities, Schuchat said.

In New York, Queens social worker Brandy Robinson said deaths would have to come down “for me to feel safe to get back on the train or do anything.”

“It’s very hard to come out of the house at all,” said Robinson, 34. “I just try to keep the faith and hope that this will pass soon.”

Millions of South Koreans flocked to polling stations Wednesday for national parliamentary elections considered a referendum for President Moon Jae-in, who enters the final years of his term grappling with the historic public health crisis. Long, snaking lines appeared to defy expectations of a low turnout, and poll workers checked temperatures and whisked away people exhibiting fever or arriving without masks to separate areas to vote.

In Britain, with a death toll put at over 12,000, new data showed that the true number is hundreds higher. And China faced a new flare-up along its remote northern border with Russia.

In Italy, which has seen more than 21,000 deaths but on Tuesday reported the smallest number of new infections in a month, bookstores, stationery stores and shops selling baby supplies were allowed to open in many places. Forestry workers, needed to clear dead trees ahead of the summer fire season, also went back.

In Spain, with more than 18,000 dead, workers returned to some factory and construction jobs this week, while stores and offices remained closed. Hardware and gardening stores reopened in Austria, but Chancellor Sebastian Kurz said he stands ready to “pull the emergency brake” if there's a resurgence.

Worldwide, about 2 million confirmed infections have been reported and over 120,000 people have died, according to Johns Hopkins. The figures understate the true size of the pandemic, because of limited testing, uneven counting of the dead and concealment by some governments.