US Student Scores Lag in Math, Above Average in Science 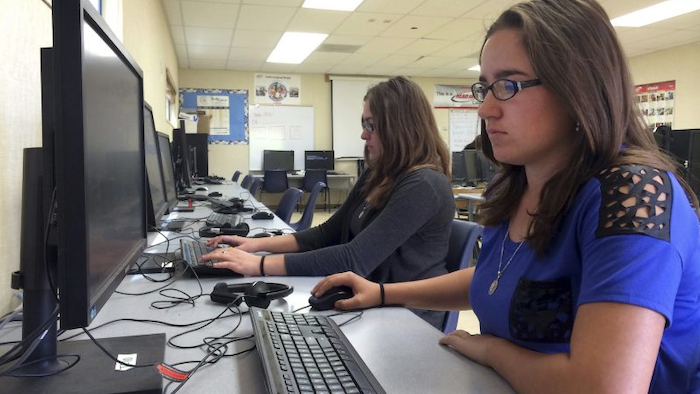 American students may not be reading any better, but they’re moving up in rankings of educational achievement worldwide because many of their peers in other countries are performing worse.

And while their math performance may not be declining, 15-year-olds in the United States still lag the scores of their peers in dozens of other countries.

Overall, the latest global snapshot of achievement shows American students scoring above average in reading and science, but below average in math.

The 2018 Program for International Student Assessment, or PISA, shows several Asian school systems at the top. The best-performing across all three measures was a group of four Chinese provinces — Beijing, Shanghai, Jiangsu and Zhejiang. PISA seeks to test not only what students know, but whether they can apply that knowledge to solve problems.

About 600,000 15-year-old students in nearly 80 nations and educational systems took part in the two-hour computer-based test last year. The test is based on a 1,000-point scale.

Average U.S. scores didn’t change significantly in any of those subjects since 2015. Average U.S. scores are also basically unchanged since when the test was first given in 2000 for reading and in 2003 for math. American science scores are up since 2006, thanks to improvements in earlier years.

U.S. Education Secretary Betsy DeVos said in a statement that students need “the freedom to pursue different options and a more personalized educational experience.” She has been promoting proposals for federal tax credits for donations made to groups offering scholarships for private schools, apprenticeships, school vouchers and greater reliance on privately run charter schools.

“The bottom line is there has not been a single study that shows American education is improving enough,” DeVos said. “Scores have flatlined for a decade. Worse yet, scores for our most vulnerable students continue to decline.”

Peggy Carr, the associate commissioner for the National Center for Education Statistics, told reporters Monday that the U.S., by holding steady in reading scores, rose in comparison with other countries.

“It’s not exactly the way you want to improve your ranking, but nevertheless our ranking is improved,” Carr said. However, she noted the U.S. is “clearly struggling” in math.

Like recent results on another major nationwide test — the National Assessment of Educational Progress — U.S. results showed the highest performing students were doing better in reading and math, while lower-performing students didn’t improve.

“It’s another red flag that this is something to think about,” Carr said.

Tom Loveless, an educational researcher near Sacramento, California, said the Chinese provinces that were tested saw a substantial increase in their scores. It’s not clear that that group of students is representative of China at large, with Carr repeatedly telling reporters Monday that the four large cities are more affluent than China as a whole. The Chinese region displaced the 2015 frontrunner, the Asian city-state of Singapore.

“It’s the only country where they allow the national government to select the provinces that are tested,” Loveless said. “It still makes it very difficult to interpret the Chinese scores.”

“The U.S. is basically doing what it’s done since PISA started, which is hanging around the middle of the pack,” Loveless said.

Others, though, are deeply concerned about U.S. scores, especially in math. Marc Tucker, the founder of the National Center on Education and the Economy, said the United States must improve if it is to remain economically competitive with China.

“China is now poised to overtake the U.S. as the world’s largest economy. It is hard to see how the United States can compete with a far larger country that has a much better educated workforce that charges much less than we do for labor,” Tucker said.

A mixture of multiple-choice and open-ended questions, the test is coordinated every three years by the Paris-based Organization for Economic Cooperation and Development, or OECD. Schools in each country are randomly selected, and OECD says the selection of schools is kept as inclusive as possible so that student samples are drawn from a broad range of backgrounds and abilities.