The new material is so effective that it could be used to provide energy for sensors or even small computer processors. 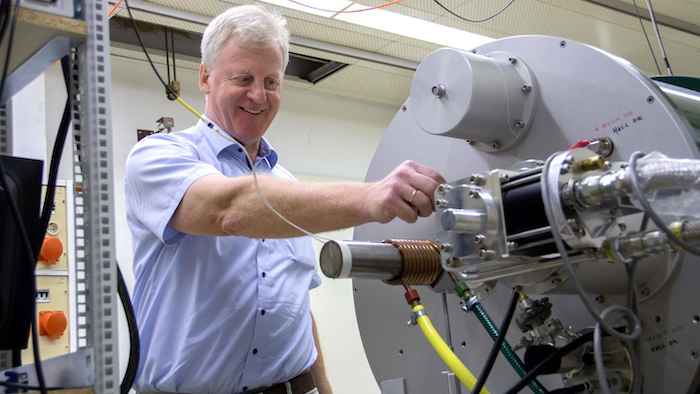 This is professor Ernst Bauer in his lab.
TU Wien

Thermoelectric materials can convert heat into electrical energy. This is due to the so-called Seebeck effect: If there is a temperature difference between the two ends of such a material, electrical voltage can be generated and current can start to flow.

The amount of electrical energy that can be generated at a given temperature difference is measured by the so-called ZT value: The higher the ZT value of a material, the better its thermoelectric properties.

The best thermoelectrics to date were measured at ZT values of around 2.5 to 2.8. Scientists at TU Wien (Vienna) have now succeeded in developing a completely new material with a ZT value of 5 to 6. It is a thin layer of iron, vanadium, tungsten and aluminium applied to a silicon crystal.

The new material is so effective that it could be used to provide energy for sensors or even small computer processors.

Instead of connecting small electrical devices to cables, they could generate their own electricity from temperature differences. The new material has now been presented in the journal Nature.

"A good thermoelectric material must show a strong Seebeck effect, and it has to meet two important requirements that are difficult to reconcile," says Prof. Ernst Bauer from the Institute of Solid State Physics at TU Wien. "On the one hand, it should conduct electricity as well as possible; on the other hand, it should transport heat as poorly as possible. This is a challenge because electrical conductivity and thermal conductivity are usually closely related."

At the Christian Doppler Laboratory for Thermoelectricity, which Ernst Bauer established at TU Wien in 2013, different thermoelectric materials for different applications have been studied over the last few years. This research has now led to the discovery of a particularly remarkable material - a combination of iron, vanadium, tungsten and aluminium.

"The atoms in this material are usually arranged in a strictly regular pattern in a so-called face-centered cubic lattice," says Ernst Bauer. "The distance between two iron atoms is always the same, and the same is true for the other types of atoms. The whole crystal is therefore completely regular".

However, when a thin layer of the material is applied to silicon, something amazing happens: the structure changes radically. Although the atoms still form a cubic pattern, they are now arranged in a space-centered structure, and the distribution of the different types of atoms becomes completely random. "Two iron atoms may sit next to each other, the places next to them may be occupied by vanadium or aluminum, and there is no longer any rule that dictates where the next iron atom is to be found in the crystal," explains Bauer.

This mixture of regularity and irregularity of the atomic arrangement also changes the electronic structure, which determines how electrons move in the solid. "The electrical charge moves through the material in a special way, so that it is protected from scattering processes. The portions of charge travelling through the material are referred to as Weyl Fermions," says Ernst Bauer. In this way, a very low electrical resistance is achieved.

Lattice vibrations, on the other hand, which transport heat from places of high temperature to places of low temperature, are inhibited by the irregularities in the crystal structure. Therefore, thermal conductivity decreases. This is important if electrical energy is to be generated permanently from a temperature difference - because if temperature differences could equilibrate very quickly and the entire material would soon have the same temperature everywhere, the thermoelectric effect would come to a standstill.

"Of course, such a thin layer cannot generate a particularly large amount of energy, but it has the advantage of being extremely compact and adaptable," says Ernst Bauer. "We want to use it to provide energy for sensors and small electronic applications." The demand for such small-scale generators is growing quickly: In the "Internet of Things", more and more devices are linked together online so that they automatically coordinate their behavior with each other. This is particularly promising for future production plants, where one machine has to react dynamically to another.

"If you need a large number of sensors in a factory, you can't wire all of them together. It's much smarter for the sensors to be able to generate their own power using a small thermoelectric device," says Bauer.

May 18th, 2022
Latest in Electronic Components