Patterning metals for electronics and solar cells can be slow, expensive and involve toxic chemicals. 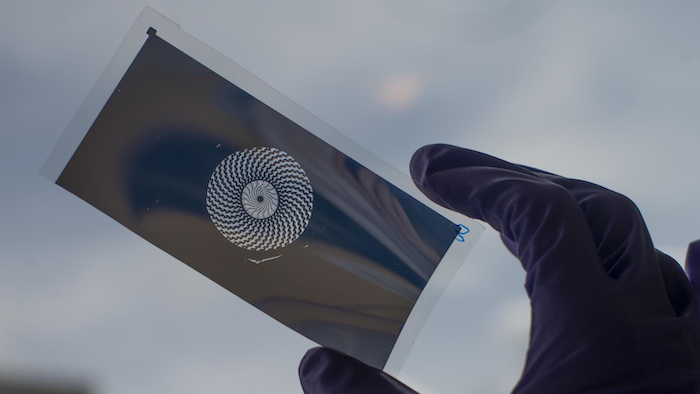 An example of a patterned metal made using the new technique.
University of Warwick

An innovative way to pattern metals has been discovered by scientists in the Department of Chemistry at the University of Warwick, which could make the next generation of solar panels more sustainable and cheaper.

Silver and copper are the most widely used electrical conductors in modern electronics and solar cells. However, conventional methods of patterning these metals to make the desired pattern of conducting lines are based on selectively removing metal from a film by etching using harmful chemicals or printing from costly metal inks.

Scientists from the Department of Chemistry at the University of Warwick, have developed a way of patterning these metals that is likely to prove much more sustainable and cheaper for large scale production, because there is no metal waste or use of toxic chemicals, and the fabrication method is compatible with continuous roll-to-roll processing.

The work is reported in the paper 'Selective deposition of silver and copper films by condensation coefficient modulation' published as an advanced article on 13th August in the journal Materials Horizons.

Thanks to £1.15 M funding from the UK Engineering and Physical Sciences Research Council, Dr Ross Hatton and Dr Silvia Varagnolo have discovered that silver and copper do not condense onto extremely thin films of certain highly fluorinated organic compounds when the metal is deposited by simple thermal evaporation.

Thermal evaporation is already widely used on a large scale to make the thin metal film on the inside of crisp packets, and organofluorine compounds are already common place as the basis of non-stick cooking pans.

The researchers have shown that the organofluorine layer need only be 10 billionths of a metre thick to be effective, and so only tiny amounts are needed.

This unconventional approach also leaves the metal surface uncontaminated, which Hatton believes will be particularly important for the next generation sensors, which often require uncontaminated patterned films of these metals as platforms onto which sensing molecules can be attached.

To help address the challenges posed by climate change, there is a need for colour tuneable, flexible and light weight solar cells that can be produced at low cost, particularly for applications where conventional rigid silicon solar cells are unsuitable such as in electric cars and semi-transparent solar cells for buildings.

Solar cells based on thin films of organic, perovskite or nano-crystal semiconductors all have potential to meet this need, although they all require a low cost, flexible transparent electrode. Hatton and his team have used their method to fabricate semi-transparent organic solar cells in which the top silver electrode is patterned with millions of tiny apertures per square centimetre, which cannot be achieved by any other scalable means directly on top of an organic electronic device.

Dr Hatton from the Department of Chemistry at the University of Warwick comments:

"This innovation enables us to realise the dream of truly flexible, transparent electrodes matched to needs of the emerging generation of thin film solar cells, as well as having numerous other potential applications ranging from sensors to low-emissivity glass."