An unlucky encounter with a bird caused an Air Force jet to inadvertently drop three non-explosive training bombs over Florida.

Last week, the Air Force inadvertently tried to add their own kind of fireworks to the holiday festivities. Apparently, an A-10C Thunderbolt II out of Moody Air Force Base in Georgia dropped three 25-pound non-explosive training bombs after an unlucky encounter with a bird.

The rounds fell harmlessly just outside of Suwannee Springs in northern Florida. Thus far, the Air Force has failed to locate the shells.

Fortunately, the jet wasn’t carrying its wartime payload of 500-pound M1a-82 bombs. The dummy rounds do carry a small pyrotechnic charge and could pose a slight danger to anyone who might try to handle them.

Although this encounter had a minimal impact on the plane, its passengers and its surroundings, bird strikes are no joke in the aerospace industry.

They first gained notoriety after an incident that became known as “The Miracle on the Hudson,” when Captain Chesley Sullenberger had to land his Airbus A320 on New York’s Hudson River after one of the engines was damaged by a flock of Canadian geese.

These encounters with our winged friends have also generated more than $800 million in damages to jets and transport planes. The most recent being an F-35 stealth fighter that needed $2 million in repairs after encountering a bird during takeoff. 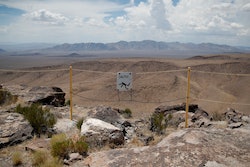